Whenever I hear a Republican raise the Spector of crime I can’t help but think that theirs is the party whose elected officials are hiding, harboring and following arguably the biggest criminal in American history. Can you guess who?

Much of their rhetoric on crime issues is simply a substitute to talk about race without saying race. Much of what they say is about “cities” which is their coded word for black. Raising fear and stoking the race issues are their bread and butter. The more fear, the more their voters turn out.

Yet despite all their rhetoric about crime they coddle within their midst criminals who make a mockery of our laws and our system of justice. I am so old I can remember when taking Top Secret documents would get decades in solitary confinement. I remember when rape would get a decade or more in the slammer.

Maybe you can remember when fraud would get a decade or more in prison and gazillions in fines. I have just mentioned just a few of Trump’s crimes. So when we hear the likes of Grassley or Reynolds bring up crime as an issue, I just laugh. Prove it by standing up for justice in the case of Donald Trump rather than begging at his feet for his blessing.

When I hear the Hinson’s and Miller-Meeks of the world talk about crime I wonder when they will show some backbone and stand up to Trump?  When they had their chance to stand up to the man who led an uprising against OUR! US government they shrunk in their duty and voted to let Trump go.

How about it Grassley and Ernst? You both had two chances to stand up for “law and order.” The situation was tailor made for a Senator with some backbone to show their mettle. Instead you both slunk away showing the cowardice that will be your legacy. Now you grovel at the feet of America’s greatest criminal.

Tough on crime, Kim Reynolds? Why then did you grovel for a word of praise from America’s greatest law breaker?

Talk about the elephant in the room!

I can damn sure betchya that Mike Franken would not have shrunk before Trump. Franken understands the rule of law and that we are all equal in the eyes of the law. Cindy Axne didn’t shrink. What about Liz Mathis, Christina Bohannan and Ryan Melton? I am sure they would have stood up.

Would Deidre DeJear wilt in her duty? I doubt it! Let’s give her a chance and see. She will surprise us! 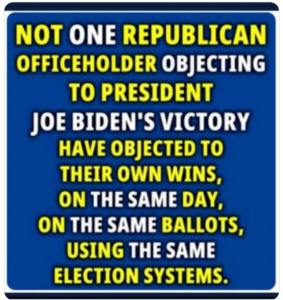