Choosing Those Who Believe In Reality 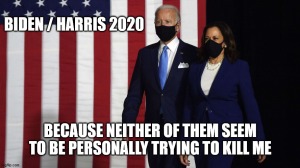 As the country careens toward the end of the election season, Iowa is literally careening toward the vary dubious (and preventable) mark of over 100,000 of its citizens having been infected. That is over 3% and growing fast. Of those infected we are headed toward 1,500 dead. That is a high percentage.

It is not only on the pandemic that Republican politicians are out of touch. Bobby Kaufmann, current representative in Iowa House District 73 has a negative ad on the air against his opponent Lonny Pulkrabek. This ad is pure fantasy and has no grounding in reality according to a KCRG TV analysis.

“ANALYSIS: In an ad decrying misleading attacks, these claims are presented in a fake newscast format with a made-up “Iowa News” graphic that even resembles the branding of a local TV outlet. The video of rioters clashing with Police is also not from Johnson County; at least one of the video clips appears to be of protests in Des Moines.”

The analysis goes on for several more paragraphs, all very condemning of the Kaufmann video. The lesson to be drawn from the fake Kaufmann video and all the other fake videos from Republican sources is that making decisions for society by elected officials is very serious business. Those elected to those positions should at the very least show some evidence of being in touch with reality. Policy decisions based on fantasy beliefs will by definition be bad policy.

Kaufmann’s fantasy video is only one small part of the fantasy videos that Republicans from the White House to the court house are running on our airwaves and of course on social platforms like Facebook. Joni Ernst has so twisted Theresa Greenfield’s business experience that it looks like a pre-teen making up stories.

Ernst also pretends that she cares about our health care in her fantasies. She voted several times to kill the ACA and backs the current case in the Supreme Court.

I am not as familiar with advertisements from the congressional campaigns. I have no doubt we have a good number fantasy videos among the Republican candidates.

No doubt the king of the hill for fantasy videos is Dear Leader himself. Trump’s fantasy videos claim solutions that never happened and a giant heaping helping of BS on the corona virus. The stories that the Trump campaign rolls out are only worthy of a seven year old with a vivid imagination.

On the other side of the aisle, Democrats deal with reality. Their ads generally deal with real issues like health care and what their stands are on those issues. They talk about what they will do so that we do not revert back to the bad old days on insurance that doesn’t pay and the days of those infamous phrase “pre-existing conditions.”

Way back in the days of George W. Bush lowly aide Ron Suskind let the cat out of the bag letting the world know that his party did not deal with reality:

“We’re an empire now, and when we act, we create our own reality. And while you’re studying that reality—judiciously, as you will—we’ll act again, creating other new realities, which you can study too, and that’s how things will sort out. We’re history’s actors…and you, all of you, will be left to just study what we do.”

Call me old fashioned but what we need from elected leaders at a minimum are people who will work for reality based solutions for real problems. To create policy based on some fantasy world will lead us into policies that won’t work because they are not designed for the real world.

We can only base our votes on what our politicians tell us. One side deals with reality and will base policies based on reality. That is what has led to policies over the decades such as Social Security, Medicare and Medicaid that have been solid policies that have served the country well over a long period. Economies under Democrats have far outperformed this under Republicans

On the other hand Republicans base their policies on beliefs in fantasy worlds. They believe in “supply side economics” which has led to recessions under both Bushes. Only reality policies from Bill Clinton and Barack Obama saved us from disasters.

We are careening toward another economic disaster. Leave Trump in power and it will happen as they tell you it isn’t happening, just like the corona virus. Trump’s first term will be the first time a president lost jobs in a term since Herbert Hoover’s term. But that is what happens when your only answer to every problem is cutting taxes for the rich.

We need government run by people who are based in reality. That would be Democrats from the White House to the court house.