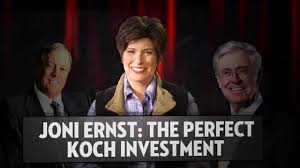 From KMA radio in Shenandoah:

“The Senate Intelligence Committee is being really thoughtful about this, and working in a bipartisan manner,” said Ernst. “They’re doing their job in looking into the claims. They’ll also be going through that transcript, and taking a look. This is an effort that I support, and can get behind. It’s working together to get to the bottom of it, actually finding out the facts before trying to throw this president under the bus.”

Supporters of the inquiry believe it’s necessary because the phone call constitutes a national security issue. But, Ernst questions whether there was any “quid pro quo”–a favor or advantage granted in return for something–regarding Trump’s conversations with Ukrainian President Volodymyr Zelensky.”

Senator, you should know that in this case there doesn’t need to be a “quid pro quo” (this for that) arrangement. In this case the president is directly asking for something of value (dirt on an opponent) from a foreign national, in this case the President of Ukraine. This is illegal. The president does not get excused simply because he is president.

“There’s very clear evidence, as reflected in the memo of the call, that President Trump specifically asked the president of Ukraine to help in the process of digging up dirt on Joe Biden,” says Elliot Mincberg, a former chief counsel for oversight and investigations of the House Judiciary Committee, who is now a senior fellow at a liberal advocacy group People for the American Way. “That is clearly asking a foreign national to provide something of value to his campaign and that’s illegal under federal law.”

Perhaps after nearly 5 years in the senate she could take some time and learn the laws herself rather than relying on the likes of Mitch Mcconnell or Chuck Grassley to misinform her. Should the House impeach the president, let us hope she does her duty and reads the laws before she votes. Impeachment is one vote that should be taken seriously.

Ernst has left little doubt in her 5 years that she is a hyperpartisan who marches to beat of the Koch brothers and the current president. Iowans need leadership that can put partisanship behind them and work for the good of Iowans. That is not Ernst.