Maybe WE CAN Do Something About Guns 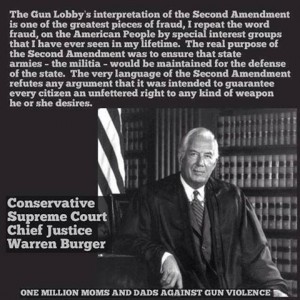 “Imagine this: You’re in a church, or a school, or a concert, or a movie theater, and you hear gunshots. The next thing you know, you wake up in a hospital bed. You learn that you’re a survivor of a mass shooting, and that doctors spent hours removing bullets from your body. Soon, you’ll discover that the health care you’ve received so far will cost you thousands of dollars out of pocket, and that you’ve incurred injuries that will require pricey lifetime treatment. You then hear the details of the shooting. The gun that nearly killed you was an assault weapon marketed to civilians for its military-grade performance, it was designed to shoot many people in a brief amount of time, and its manufacturer supplied the weapon to a dealer notorious for selling firearms illegally.

Under centuries-old theories of liability, you should be allowed to sue both the manufacturer and the dealer for torts like negligence and public nuisance. You could then use that money to pay your medical bills. If you are hurt by a car or a prescription drug, after all, you are typically allowed to sue for damages. But thanks to a law called the Protection of Lawful Commerce in Arms Act, you have no legal remedy if you are hurt by a gun. In passing that law in 2005, Congress granted gun dealers and manufacturers legal immunity in all 50 states, the District of Columbia, and every U.S. territory. No other industry receives this privilege: Firearms are the only consumer products that receive federal immunity from tort liability.

In the United States, about 315 people are shot every day, and 222 of them survive. Mass shootings are becoming more common and taking more victims; 58 people were killed in the recent Las Vegas shooting, and more than 500 people were injured. These survivors are often saddled with enormous medical debt; the health care costs of gun violence totals about $2.8 billion a year. Thanks to the PLCAA, injured survivors of gun violence are frequently driven into bankruptcy. Given today’s political landscape, there is no hope of repealing it, and individual states have no power to abridge a federal law.”

Stern reminds us of something that so many of us forget – there are well over 100,000 shooting victims a year in this country. ( 315 per day X 365 days =  114,975). Of those 93 on average die. This leaves some 81,000 still alive but in what shape? As noted above the fact that a person survived often is the only good news they will get. Besides possible bankruptcy, they may be looking forward to a life dependent on others, unable to ever work again and possibly in severe pain.

In America, we focus on the number killed. Quick, can anyone tell me how many were wounded in the shooting at the church in Sutherland Springs, Texas a couple of weeks ago? I looked at half a dozen stories and none mentioned the injured (there were 20 injured). Yet many of those folks and their families just suffered a gut wrenching blow that may bankrupt them, disable them so they can never work again and possibly condemn them to a life of pain, dependency and endless medical procedures.

Now try to put yourself in the shoes of one of the injured or the shoes of a parent of the injured. Is this what you want? Is this what you want for your child? Do you really believe that 100,000 Americans being shot yearly is as Bill O’Reilly claims “the price of freedom.”?  Can you imagine in your wildest dreams that our founders would accept deaths and injuries on this scale as “the price of freedom.”?

Ask yourself also, just what kind of perverted “freedom” demands blood sacrifice like this?

Stern then offers at least a partial solution given the current circumstances: (from the same article above)

“There is, though, something states can do. Legislatures should impose a new tax on gun dealers and manufacturers and place the revenue in a special fund. This fund should be used to cover the medical bills of gun violence survivors. The firearm industry is responsible for America’s crisis of gun violence. It should be required to pay for it.”

Be sure to read this very important article. It is long past time that victims of gun violence at least have some recourse.

One more thought on guns. We have many tools that are used in everyday life that can cause injuries and death. We have one federal bureau, OSHA (Occupational Safety and Health Administration) that is tasked with making workplaces safer for workers. Anyone who has spent a little time on a factory floor or a construction site knows that there are multiple ways a worker can be injured or killed every day.

Do we just accept that and let people die? Then offer some “Thoughts And Prayers” but do nothing to stop it from happening again? HELL NO!

The easiest example to offer is the safety requirements that have been added to automobiles over the years. From early days when things like windshields, headlights, windshield wipers, rear view mirrors on up to today with air bags to what may be coming such as computerized cameras that are already on some cars.

Why can’t that be done with guns? We know there are print readers that scans the thumb print and won’t unlock unless it is the owner of the gun. How about remote locks on guns? I know there are many other great, great safety precautions that could be adapted to guns.

Instead the only changes we have seen in guns is to make them exponentially more deadly. Looks like lawmakers and others are afraid of the NRA.

It is time they are afraid of the vast majority that want guns made safer and full compensation for victims. You can only make that happen if you vote! It wouldn’t hurt to call and write them also.

retired in West Liberty
View all posts by Dave Bradley →
This entry was posted in #trumpresistance, Blog for Iowa, firearms, gun control and tagged #vote. Bookmark the permalink.
Loading Comments...
Comment
×
%d bloggers like this: