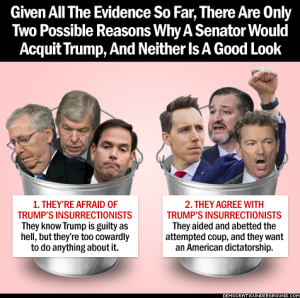 Thanks to EarlG at democraticunderground.com

Donald Trump is living the egomaniacs wet dream. For a guy who wants to be the bride at every wedding and the corpse at every wake –  the guy who wants all the attention all the time – Trump has achieved his dream. He is dominating airwaves as few ever have.

The few that have gotten the attention that Trump is getting started major wars or overthrew the government of major countries. Trump tried to overthrow the government of the United States. He didn’t get the job done, but he came a lot closer than most of us would care to consider.

The impeachment is only focusing on the insurrection on January 6th and some of the events leading up to the insurrection. While there were other events during the Trump presidency that in any other presidency would have led to an impeachment, such incidents were so frequent as to become the norm and thus not stand out as so egregious. It literally took a violent, deadly attempt on his part to overthrow the government to be impeached.

Beyond the insurrection, the Trump presidency was known mostly for its trademark incompetence and corruption. What little that did get done was often bad for the country and offered a big payoff for somebody in the administration with some reward for the Trump family among the lucre. I offer the USPS as exhibit A.

So while our attention is once again turned toward Trump, in an almost dark corner of the media universe, newly minted President Joe Biden continues the work of REBUILDING the WHOLE DAMN GOVERNMENT that he inherited. Trump left Biden a ship of state that was full of holes and no patching material because the Trumpers had sold it.

Faced with an economy that has been upended by a pandemic that was allowed to run unrestricted by the previous administration, Biden and his team started say one to put together plans and systems to bring the country off its knees. Biden hasn’t even been there a month yet most Americans are feeling optimistic again, believing that we once more can beat conquer whatever tries to take us down.

One pundit whose name escapes me was asked on the Stephanie Miller Show the other day what grade would he give President Biden so far. “What comes above A+?” was his answer. But it will take time to fix what Trump broke – including the USPS.

Yet Biden will not be without opposition. With the US Senate at 50-50 the Democrats may have to compromise a bit more than they want. In Republican led states, legislatures and governors are doing all they can to disenfranchise Democrats before the next election in order to take power in what seems to be the only way they can – by cheating.

Don’t forget, also, that most of the radio and TV stations in this country are owned by corporations that are right wing and therefore disposed to be against whatever Biden and Democrats do.

The scourge of the Trump years will continue to resurface on occasion as his policies are rejected with new and hopefully more airtight laws.

One last thought. I can’t get over how so much of what went on in the past four years seems to be straight out of an old time Mafia novel – think of The Godfather if you will.

At the top of one of the crime families is Don Trump. His family business is ostensibly travel with hotels and golf courses. That is his cover. Mostly his business is accumulating power at all levels. He “owns” congress men and women. He owns nearly half the US Senate. He owns 2/3rds of the Supreme Court and over half of the lower courts in the country. He is affiliated with Governors at the state level who do his bidding in order to gain his blessing and the love of his followers.

He has the loyalty of nearly half the police in the country and they are willing to bend rules to do what they believe will help Trump. And while he has no army per se, he has bands of loyalists throughout the country who will do his bidding at the drop of an ask. This includes harassing protestors, starting protests, harassing Democratic governors.

This all culminated with his ask that these loyalists come to Washington, DC to overthrow the government to keep him in power.

Like all things, soon this will all be a bad dream. However, every January 6th should be memorialized with silent vigils to remind us just how close we came to seeing our democracy end.