Where Did The Money Come From? 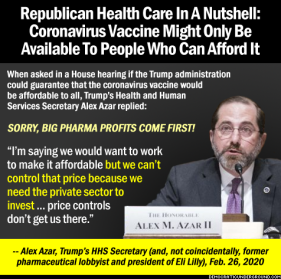 A couple of weeks ago, I wrote a post giving my understanding of how the Republican Party (aka now the Trumpublicans) had worked for 40 years to drive the country so deeply in debt that the government could not possibly begin any new social programs and in fact would be going after some of the stockpiles of money such as Social Security or Medicare to pay for emergencies.

As the administration continued to fiddle while the country burned it became readily apparent that massive amounts of money would be needed to keep the country afloat during the crisis. Given the size of the need it was probably a natural jump for those of us who understood the game that the Republicans have been playing for decades that they would immediately grab at a chance to use the rolling disaster to do in what has been their targets for decades.

Trying to kill Social Security, Medicare and Medicaid at a time of national crisis would seem to be a dangerous political move, but they have tried such moves before and survived. After all as Covid-19 cases are piling up, the administration is still going full bore in their effort to have the ACA declared unconstitutional by the courts. (Note: I believe the SCOTUS has delayed hearing the case until AFTER the election.)

However, the Republicans (Trumpublicans) took an unexpected turn. They decided to become Socialists. Not Socialists in the classic sense, but the kind that of Socialist that took the collective money and dispersed into the economy through corporations. At least that was McConnell’s plan. And the money would come from nowhere just as the money for the giant corporate tax cuts came from nowhere in the December 2017 tax cut bill. So much for the old Republican mantra of caring about deficit spending.

While McConnell’s plan was pretty much set aside in deference to Democratic ideas of more logical disbursement that would go to the unemployed, small businesses and others most directly hurt by the huge economic slowdown caused by the Covid-19 outbreak. Still, where would the money come from?

For those of us pondering this question, into the breech steps Professor Stephanie Kelton, the former Chief Economist for the U.S. Senate Budget Committee, author of the upcoming book The Deficit Myth: Modern Monetary Theory and the Birth of the People’s Economy. Kelton was interviewed on The Brad Blog by Brad Blog proprietor Brad Friedman:

“And yet, nobody — not Republicans or Democrats in the Senate, House of Representatives or White House — seems to be complaining that we don’t have the money to pay for it, or that we must cut somewhere else or raise taxes to be able to afford it. It is as if, as our guest today, Stony Brook University Professor of Economics and leading authority on Modern Monetary Theory STEPHANIE KELTON notes, we are able to just “conjure into existence, in a matter of days, a couple of trillion dollars,” enough money for the largest spending bill in the history of the country. And, as it turns out, she is right!

As Rep. Alexandria Ocasio-Cortez (D-NY) noted recently in response to the sudden disappearance of so-called “Deficit Hawks” on Capitol Hill: “It’s actually a fascinating progressive moment, because what it’s shown is that all of these issues have never been about ‘how are you going to pay for it?’ It’s never been about whether we have the capacity to do these things. All of these excuses that we have been given as to why we can’t treat people humanely have suddenly gone up in smoke. And what has been revealed is that all of these issues were really about a lack of political will and who you deemed worthy to be in an emergency or not.”

Kelton, the former Chief Economist for the U.S. Senate Budget Committee, has been trying to make these points of late in Twitter threads, New York Times op-eds, and her upcoming book The Deficit Myth: Modern Monetary Theory and the Birth of the People’s Economy. As she tells me today, “Congress will always find the funds to accomplish the things that it considers a priority. If that’s tax cuts, then that’s the priority, and the money will be there. If it’s wars, that’s the priority. If it’s dealing with a global pandemic, then that suddenly becomes a priority.”

She laments that Democrats, over months on the Presidential campaign trail, have not been able to educate the American public about these facts and how difficult it has now become — after years of phony claims from politicians (of both parties) that the U.S. was going broke or that government should be run by the same fiscal rules that govern households and businesses — “to disabuse people of these myths that we have heard from our politicians, pundits and reporters.”

She argues “There is a time and a place for offsets. It’s not a free lunch”, but Bernie Sanders’ call for “canceling $81 billion of medical debt is nothing. It’s everything to the people who have medical debt. But from the perspective of the federal budget, it’s practically a rounding error, it’s so trivial. We could have done that and not offset it,” she says. “The federal government’s finances don’t work like ours. They’re not subject to the same constraints as a household or a private company. Once you get your head around that, a lot of other things follow.”

“A year ago, could we have just done free college or Medicare For All or whatever? The answer is yes. Congress can write and pass any bill it chooses, period. The risk, though, is that if you don’t include offsets, and you’re simply authorizing these huge spending bills left and right, at some point you’re going to eat up all of the fiscal space left in the economy. In other words, it’s going to become inflationary. So there is a time and a place for offsets.” That time, apparently, is not now, however. And she hopes that after this emergency finally passes, enough Americans will remember what happened here, how easy it was to “find” all the money when it was needed, to finally do away with the notion that endless wars and corporate subsidies and tax cuts for the wealthy are the only things we can afford to spend money on to “promote the general welfare” of the American people.”

There is much more and the full interview can be heard at The Brad Blog. The show is at the bottom of the link. The intro to the interview starts at @19 minutes and lasts about a very interesting 30 minutes. This is a very eye opening interview.