Corruption And Incompetence Amid The Covid-19 Crisis 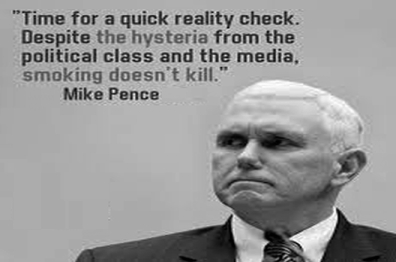 Let’s face it, the biggest concern of the possible pandemic brought on by the Covid-19 outbreak with the current administration is not the health and safety of the American people. Their biggest concern is that the current president may come off looking bad. This was readily on display at a hastily called press conference Wednesday afternoon.

It feels almost karmic that what could be one of the worst disease outbreaks in a long time coincides with some of the worst governments in history and probably the worst, the most incompetent and most corrupt ever in the world’s most powerful nation, the United States. That is karmic.

As the Wednesday afternoon press conference wandered around the subject of the corona virus, the current president made several flat out false statements about the current state of the disease and its prevention. Then he named the vice-president as the head of the task force to lead the effort against the disease.

In a position where there should be just a smidgeon of knowledge of science and respect for science we now have a religious crazy who believes (or at least publicly stated that smoking does not cause cancer. His one experience leading an effort against a disease outbreak less than a decade ago when as governor of Indiana he was able to turn a controlled HIV situation into a full-blown crisis:

“I don’t believe effective anti-drug policy involves handing out drug paraphernalia,” Pence said, rejecting the idea of a needle exchange program to combat an HIV outbreak driven by needle sharing. Pence may not believe it, but public health experts know that clean needle exchange is an important tool to prevent the spread of HIV among intravenous drug users. Pence did eventually give in and allow needle exchange programs in Indiana, but not until hundreds of people had been infected.

A study on the Indiana outbreak pointed a finger squarely at Pence (and his predecessor). “Our findings suggest that with earlier action the actual number of infections recorded in Scott County—215—might have been brought down to fewer than 56, if the state had acted in 2013, or to fewer than 10 infections, if they had responded to the HCV outbreak in 2010-2011,” said one of the study’s authors, Yale statistician Forrest Crawford. “Instead they cut funding for the last HIV testing provider in the county.” Pence became governor in 2013.

That one Scott County HIV testing center that closed, by the way, was a Planned Parenthood clinic—and as a member of Congress, Pence had also voted in 2011 to defund Planned Parenthood. Pence’s war on Planned Parenthood doesn’t just affect HIV testing, it affects testing for other sexually transmitted infections and cancer and measures to prevent all of the above. But hey, Mike Pence also doesn’t believe condoms are effective against STIs. Literally, he said in 2002, “Frankly, condoms are a very, very poor protection against sexually transmitted diseases.”

Pence’s opposition to science-based public health doesn’t stop with things sexual or even involving illegal drug use. In the year 2000, decades after the dangers of smoking were widely known, Pence offered what he called a “reality check”: “Despite the hysteria from the political class and the media, smoking doesn’t kill. In fact, 2 out of every three smokers does not die from a smoking related illness and 9 out of ten smokers do not contract lung cancer.”

As if the Pence choice wasn’t bad enough, we have a an administration that has already publicly stated that drug company profits will be a higher priority than getting vaccines to everyone when they are available. They also fired the US pandemic response team to cut costs in 2018– after they had passed a HUGE tax cut giveaway for the wealthiest Americans. Unbelievable, yet very real. 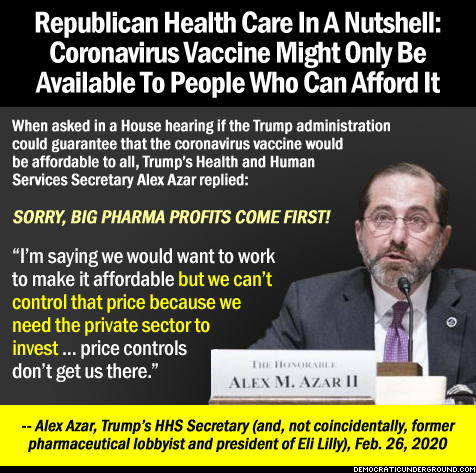 As bad as the Pence pick and the profit over public good decisions are, they are just more layers on top of an environment that makes governmental efforts to respond to crises more difficult that has been building up through the efforts of the Republican Party for decades. Some of the elements of their making governmental response difficult include:

There is probably a long list of other factors, but you get the idea.

Now we are facing a serious situation. Will the corruption that places profits above health, the cult of personality and the just plain incompetence that is fostered in this administration turn a crisis into an unimaginable disaster? Stay tuned. The administration has already declared it is “winning” despite not seemingly having a clue about what is going on.