Medicaid MCOs Get Another Huge Raise 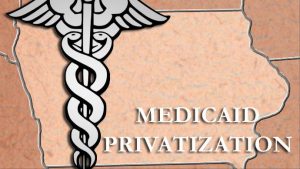 Coming on the tail of an 8.4% raise to the MCOs last year, the administration of Governor Kim Reynolds awarded the MCOs a raise of 8.6% this year. In real dollars those numbers that is a raise of $344 million in 2018 and $386 million in 2019. In total that $730 million in RAISES in the past two years.

The Medicaid program is not bringing in any more money. From my understanding Medicaid in Iowa is about a $5 billion a year proposition, so that $730 million in the last two years is coming from the program itself. That means that the patients in the medicaid program have taken approximately a 20% cut in funds that should be going to care.

From day one Iowa’s privatized medicaid program has been accused of huge cuts in service to patients, denials of service and long delays in paying provider bills. Taking another nearly $400 million from the patients this year is not going to make it any better.

Unfortunately the people who are directly affected by the Medicaid shenanigans (taking public moneys and syphoning it to private companies) are often the people with the least voice in society. Thus their complaints are often ignored and go unreported.

I am not sure of this figure, but somewhere in my memory I seem to remember that the state was able to run the Medicaid program for about 2% or $100 million of the $5 billion fund. Just the last two raises equal about 8 times that figure and the MCOs (Managed Care Organizations) claim they are losing money on that. Sounds like they must have a real problem handling money to begin with.

Petersen said Governor Kim Reynolds and Republican lawmakers can’t back up their claims that privatizing Medicaid management would save the state money. She said the state-managed system costs grew an average of 5 percent each year in the 10 years before privatization.

A great timeline of Iowa’s involvement with the MCOs can be found here at the Iowa Public radio website.