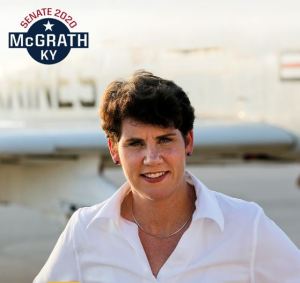 She raised $2.5 million during the first 24 hours after her announcement.

With 20 years in the United States Marine Corps and 89 combat missions under her belt, she demonstrated substantial courage and grit. If she can focus on one thing, beating McConnell, she may have a better path to election than any other recent challenger.

People are nit-picking her campaign apart after her July 9 announcement and it boils down to one thing: do Democrats want someone to take on McConnell or not? It won’t be easy for McGrath and it wouldn’t be easy for anyone. If there are better candidates out there, they should step forward.

What seems obvious from the blow back to McGrath’s campaign is we need a reminder of why Mitch McConnell has to go. Here’s Thom Hartmann interviewing Senator Jeff Merkley on that topic at Netroots Nation over the weekend.

It’s hard to tell whether anyone can beat Mitch McConnell in Kentucky. Democrats must step up and have Amy McGrath’s back if they are serious about taking the senate back.

Amy McGrath, a retired US Marine Corps Lieutenant Colonel raised in Kentucky, is running for the US Senate to fix Washington and give Kentuckians back their voice.

Amy was born the youngest of three children to Donald and Marianne McGrath. Her father was a high school English teacher and her mother was one of the first women to graduate from the University of Kentucky medical school.

When Amy was 13 years old, she dreamed of becoming a fighter pilot, but women were not yet allowed to serve in combat roles in our military. So she wrote to her elected officials to ask them to change the law. She never heard back from her senator, Mitch McConnell.

Amy graduated from the US Naval Academy and overcame the odds to become the first woman in the Marine Corps to fly a combat mission in an F/A-18 fighter jet. She served 20 years in the Marines where she flew 89 combat missions in Iraq and Afghanistan, targeting al-Qaida and the Taliban, before retiring and moving back home to Kentucky to raise her family.

Amy lives in Georgetown, Kentucky, with her husband Erik, a retired Navy pilot and registered Republican, and her three children, Teddy (7), George (5), and Eleanor (3).

Amy became a Marine combat pilot to fight and defend her country and now she is taking the fight to Washington to solve the problems Kentuckians face in their every-day lives. Amy was a registered independent for 12 years, so she always prioritizes practical solutions over partisan interests. She’s not running for Senate to get rich and join the Washington swamp. Amy is ready to take on career politicians like Mitch McConnell and bring accountability and leadership back to Kentucky.

To learn more go to amymcgrath.com.

1 Response to Can A Democrat Beat Kentucky Senator Mitch McConnell?