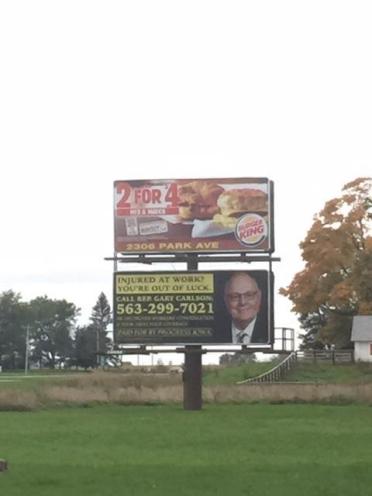 DES MOINES – Progress Iowa is launching a new advertising campaign this week to hold Representatives Peter Cownie and Gary Carlson accountable for their efforts to pass House File 518, gutting workers compensation benefits for Iowa workers. More than $10,000 will be spent on billboard and digital advertising in West Des Moines and Muscatine to call attention to the failed leadership of both Cownie and Carlson.

Progress Iowa will host a press conference tomorrow in front of one of the new billboards, to highlight the personal stories of injured workers and the failure of House File 518.

What: “You’re Out of Luck” Billboard Launch

Who: Iowans injured on the job

Where: Near the intersection of 9th Street & Grand Ave, West Des Moines, Iowa

Clark Hassig was a truck driver in Des Moines who had a career ending shoulder injury. He went to the capitol in the spring of 2017 to speak at a public hearing and warn lawmakers like Representatives Cownie and Carlson against passing House File 518, which has been disastrous for workers. “They ignored me,” said Hassig, who had never spoken at a legislative meeting until that day, “Truck driving is what I know, and at 55 it’s not easy to find a new career. I lost my ability to earn a solid income, and with a diabetic son, I also lost my family’s health insurance. Without the income replacement benefits from my workers’ compensation coverage, my family would have lost everything overnight.”

A worker facing an injury similar to the one Hassig suffered would see an 80, even 90 percent reduction in insurance coverage under House File 518. Representative Peter Cownie was the architect of this cruel new law, and Representative Gary Carlson led the charge to get it passed. A recent study released by the nonpartisan Iowa Policy Project determined that workers with shoulder injuries would lose an average of $72,000, and potentially up to $200,000.

From Iowa Policy Project’s news release on their study of the effects of the hew workers compensation law:

“A review of shoulder injury cases from 2017 provides a startling glimpse into the impact of changes to Iowa’s workers’ compensation system, indicating that workers who suffer serious shoulder injuries will on average lose out on $72,000 in compensation under the new law.

“This is the result of just one of the extreme changes in the new law,” said Matthew Glasson, a labor educator at the University of Iowa Labor Center and co-author of a new report for the nonpartisan Iowa Policy Project (IPP). “Under these new rules, some injured workers whose cases we analyzed would have seen their benefits cut by as much as $200,000 under the new rules.”

The workers’ compensation changes, along with significant reductions in public employee bargaining rights and repeal of local minimum wage laws, were among noteworthy blows to working families from the 2017 session of the Iowa Legislature. “

“The only constant among all the many changes in this law is that they are bad for workers. Probably the most significant impact will be on workers who have serious, permanent disabilities,” he said.

Much more at the link