“America Is A Gun” 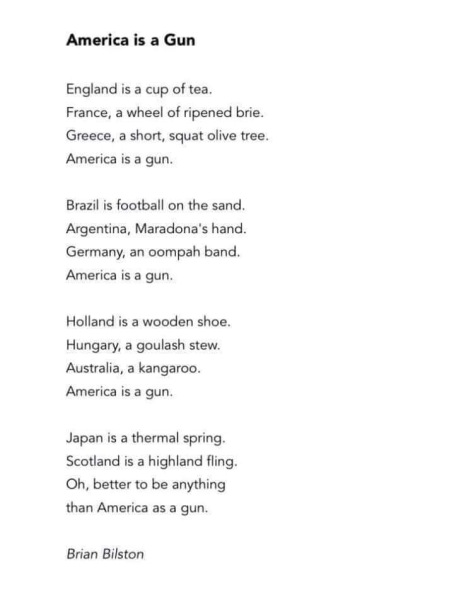 Another day, another mass murder in America. No other country has this problem.  In a country that blathers on and on about “freedom” there can can be no real freedom until we overthrow the tyranny of the gun.

In his daily substack letter for last Wednesday, Thom Hartmann had many, many salient points about mass murder in America, but these paragraphs stuck out:

Here in America, media figures, politicians, and preachers — seeking fame, fortune, and power for themselves just like the Saudi mullahs — similarly radicalize angry or self-righteous men to commit acts of mass murder.

But when the men they’ve triggered practice their terrorism to frighten Black people, Jews, abortion providers, queer people, or even former employers into submission or invisibility — or to keep politicians in offices they lost — we call them “sick” or “troubled” or “mentally ill.”

The man who shot up Club Q in Colorado Springs has been called “deranged” in media headlines featuring his “troubled past.”  He wasn’t deranged: he was a terrorist.  So were the men who murdered Jews at the Tree of Life Synagogue and Black people at a Buffalo supermarket.

All had the mental competence to identify their victims, acquire their weapons, and execute their crimes. They may not live or think exactly like you and me, they may have had tough childhoods, but they’re not mentally ill: they’re terrorists.

Hartmann’s rant is well worth the time to read it in full.

One thing Hartmann does not rail about is what often follows a mass shooting: the totally useless practice of mumbling the words “Thoughts and prayers.” Thoughts and prayers is simply a trite saying that sounds like someone cares when they really intend to do nothing.

Remember that for every gun death in America, there is a devastated group of family and friends whose life is forever altered. Grandparents, parents, siblings, cousins and friends. Believe me, it never goes away.

As I sat crying in my vehicle when the slaughter of the innocents at Sandy Hook was reported I thought “maybe this will be the one that shocks America so much something will happen about guns.”

Ten years and tens of thousands of Americans sacrificed to the gun culture, nothing has happened.