Covid Kim is magic in the way that many 4 year olds are magic. If you have a problem, you can ignore it and it will go away. This is a formula that has been tried with varying degrees of success by Republicans. Perhaps the closest parallel to this was Ronald Reagan’s decision to ignore AIDS. How did that work out?

We could tell by the success in the results that Covid Kim had been putting a lot of time in on this one:

The announcement came about two weeks after the state’s infection rate reached an all-time peak. The average number of confirmed cases each day has been declining since but remains significantly higher than it has been for most of the pandemic.

Well maybe not. But ignoring problems on the infrastructure has really worked for Republicans – or maybe not. Good luck on this one. The main purpose for this strategy is that with an election coming up in November, Covid Kim needs some time to hope that Iowans will forget her disastrous mismanagement of Covid in Iowa.

A) Black history to start with. What book did John Howard Griffin write in 1961 that rather starkly illustrated the differences between the treatment of blacks and whites in the US?

B) Two judges on the reality(?) show “The Masked Singer” walked off when the disguised singer was revealed to be what Trump insider?

C) Two ISIS leaders have been taken out by what two US presidents?

D) National Democrats are once again discussing what sacred political cow near and dear to Iowans?

E) Despite commonly held myth on viral cycles to the contrary, a study in the Netherlands has revealed that what virus has mutated a more virulent, more contagious mutant?

F) LA Rams vs. the Cincinnati Bengals in next week’s Super Bowl to be played in Los Angeles. Which team will be designated the home team?

G) Which of the major digital companies had a bad day at the stock market as revenues were flat and prospects were also?

H) Major performers continue to pull their music from Spotify as that company digs in behind what podcast host and his misinformation about Covid?

I) What Iowa state senator filed a bill in the legislature to make teachers liable for distributing pornography to school children?

J) How many slaves were estimated o have escaped through the Underground railway between 1810 and 1850?

L) The FDA is working with vaccine makers to get emergency approval for vaccines for children in what age group?

M) Iowa State University has a building named for what famous black scientist who graduated from ISU in 1896?

N) Jeff Zucker was fired as the head of what major cable newser for failing to disclose a relationship with another person at the same company?

O) President Biden announced a renewed war on what disease this week?

P) In sports, Brian Flores is really risking his career by suing what US league for racial discrimination?

Q) What world capitol has been besieged by truckers trying to turn back mandatory Covid vaccination rules in that country?

R) Sunday, the former president claimed who had the power to overturn the election on January 6th. 2021 and wants congress to investigate why he didn’t? 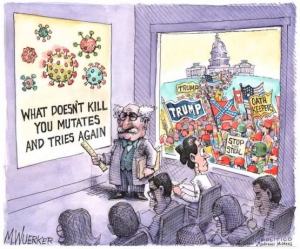 C) One each by Obama and Biden. Zero for Bush 2 and the former guy

R) The then VP Mike Pence

T) they were all historically black colleges and universities (HBCUs)

The reason the RNC wants to cancel presidential debates is because their candidates would have to plead the Fifth. – Tea Pain tweet