While Your Attention Is Diverted …… 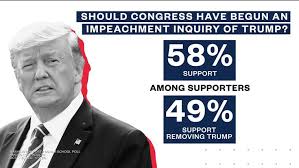 with the impeachment hearings our environment is taking another wallop from the EPA. As if that wasn’t bad enough a new report raises alarms about insect collapse.

The current administration is hard at work 24 hours a day 7 days a week to roll back any and every policy that OUR government has put in place to protect the environment and to try to keep life functioning on earth. The Republican Party has for decades opposed any environmental policy that has ever been proposed or enacted. Now with a person who has a grade school comprehension level as the head of our government, republicans are seeing their wildest dreams fulfilled while scientists and citizens shake over what may come.

Writing in the latest issue of Vanity Fair – in her story TRUMP HAS A TERRIFYING NEW PLAN TO POISON THE AIR, WATER, HUMANS – Bess Levin writes that the EPA is about to undo decades of scientific study:

At present the government formulates public health regulations, like those concerning clean air and water, based on scientific studies showing links between pollution and disease. For instance, we have rules surrounding mercury because studies conclusively proved that mercury from power plants negatively affects brain development, and rules concerning lead because of the data showing that lead in paint or dust can lead to behavioral disorders in children. The Trump administration, though, doesn’t like science or regulations, because they‘re impediments to Donald Trump’s industry cronies making as much money as possible, human health be damned. And now, his Environmental Protection Agency has found a nifty way to get rid of both in a move that is uniquely evil, even for this uniquely evil administration.

Per the New York Times, the EPA has drafted a proposal called “Strengthening Transparency in Regulatory Science,” which sounds well and good, but, of course, does the exact opposite of what the title suggests. According to the proposal, in order for an academic study’s conclusions to be considered, scientists would be required to disclose all of their raw data, including confidential medical records. Naturally, rather than lead to more “transparency,” the requirement would significantly limit medical and scientific research, which is, of course, the point. That would then make it extremely difficult to create new rules because tons of studies demonstrating links between pollution and disease are based on health information obtained under confidentiality agreements. And here’s the kicker: Not only would the proposal affect regulations moving forward, but it could retroactively apply to old ones too:

Public health experts warned that studies that have been used for decades…might be inadmissible when existing regulations come up for renewal. For instance, a groundbreaking 1993 Harvard University project that definitively linked polluted air to premature deaths, currently the foundation of the nation’s air-quality laws, could become inadmissible. When gathering data for their research, known as the Six Cities study, scientists signed confidentiality agreements to track the private medical and occupational histories of more than 22,000 people in six cities. They combined that personal data with home air-quality data to study the link between chronic exposure to air pollution and mortality.

“This means the EPA can justify rolling back rules or failing to update rules based on the best information to protect public health and the environment, which means more dirty air and more premature deaths,” Paul Billings, senior vice president for advocacy at the American Lung Association, told the Times. Michael Halpern, deputy director for the Center for Science and Democracy at the Union of Concerned Scientists, was even more blunt in his assessment: “It was hard to imagine that they could have made this worse, but they did,” he said. “This is a wholesale politicization of the process.” The Medical Library Association and the Association of Academic Health Sciences Libraries said the proposal “contradicts our core values,” while the National Association of Pediatric Nurse Practitioners said in a statement that it was “deeply concerned” that the rule would ultimately result “in weaker environmental and health protections and greater risks to children’s health.” But screw the kids, right? And their meddlesome adult minders too!”

Much more at the link.

The mind simply boggles at the damage will be done to our environment that is unfettered by scientifically grounded rules. Remember the Love Canal and the the Cuyahoga River catching on fire? I guess the Republican Party sees those as the good old days. Cancers, lung disease, unbreathable air and undrinkable water!

As scary as that is, a new report out of Sussex University in England authored by Professor Dave Goulson discusses the true impact of the insect apocalypse with a call for urgent action:

“Commissioned by a group of Wildlife Trusts in the south west, Professor Dave Goulson’s report reveals the lasting effects of declines on insect eating birds, bats, and fish, and the cost to society in terms of the millions in lost revenue and broken ecosystems.

Professor of Biology, Dave Goulson said: “Insects make up the bulk of known species on earth and are integral to the functioning of terrestrial and freshwater ecosystems, performing vital roles such as pollination, seed dispersal and nutrient cycling.

“They are also food for numerous larger animals, including birds, bats, fish, amphibians and lizards. If we don’t stop the decline of our insects there will be profound consequences for all life on earth.

“It’s not just our wild bees and pollinators that are declining – these trends are mirrored across a great many of other invertebrate species. Of serious concern is the little we know about the fate of many of the more obscure invertebrates that are also crucial to healthy ecosystems.”

However, Professor Goulson does have at least a note of hope:

“With a coordinated and concerted action from government, local authorities, food growers and the public, the Wildlife Trusts believe that insect populations can recover and thrive once more.”

But just so you don’t get too hopeful that we can turn that potential catastrophe around, think of who is in charge of our government and that right wing candidates have been changing the face of Europe lately.

Writing on Alternet  the illustrious David Cay Johnston pens an eye-opening piece about the forthcoming book “A Warning” by Anonymous that is coming out Tuesday. Among many of the observations about the current president in this book, Johnston cites this assessment:

“The sheer level of intellectual laziness is astounding,” Anonymous writes in telling how Trump acts on whatever pops into his head, convinced that he is all-knowing.

“Behind closed doors, his own top officials deride him as an ‘idiot,’ and a ‘moron’ with the understanding of a ‘fifth- or sixth-grader.’”

Rex Tillerson, the former ExxonMobil CEO who as Secretary of State tried to stop many illegal actions by Trump, was reported to have called Trump “a fucking moron,” an anecdote implied but not specified in the book.”

It is this simple. If we want to survive, Trump must be rejected next election. It is life and death. For all life.

1 Response to While Your Attention Is Diverted ……