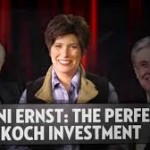 She’s not working for Iowans, folks

Last week like many I got Senator Ernst’s latest joke of a newsletter called “Make ‘Em Squeal.” I wrote about Ernst’s latest “Squeal” here last week. Then I wrote her office and asked the obvious question – where did you come up with the cost of implementing the Green New Deal at $93 Trillion?

I am naive. I really thought I would get back some statement with someone actually taking some ballpark cost estimates and fudge it around and come up with a number.  You know, something that shows someone somewhere made some half assed effort to pretend to try to make it look legitimate.

I was so wrong. Instead I received a several paragraph email with the “$93 Trillion” tucked in about halfway down with the addition of “one estimate” I guess to legitimize those numbers.

Very, very sloppy. My first thought was that if Joni was in my daughter’s climate class I would guess she would have earned a giant “F.” Ernst’s response also screamed without saying anything that she really doesn’t care about the climate.

So here is the Ernst response to my original question which I did not save. I will follow that with my response to her and her staff.

Let me ask my question again. Maybe you (actually your staff, but at your direction) didn’t understand the question.

You are a United States senator, one of only a hundred. As such when you speak or write, your words carry a lot of weight. Thus when you just state a number of “$93 Trillion” we expect that you will put some effort behind verifying those numbers.

Just saying “one estimate” without stating where that estimate came from or how it was derived is simply very lazy, sloppy work and unbecoming of one of only one hundred US senators.

The public wants to be able evaluate the reliability of such statements. Such out of the norm statements are often made only for shock value. When they are made they should be accompanied by some data justifying such an estimate.

Once again, this is sloppy, lazy work unbecoming a senator. Certainly such a response was meant to shut me up. It won’t. Why? Because climate change is simply the single most serious over riding problem humanity has. We have one planet and we are making it uninhabitable. We can’t simply move to a different neighborhood.

Your flippant response tells me you really do not care. We need people in office for whom climate change is top priority. Or perhaps you have a plan to deal with what happens when the earth becomes uninhabitable?

So, once again, what is the source of your cost for the Green New Deal and how was that cost arrived at?

And while we are at it this statement “This proposal (renewable energy) would dramatically drive up costs for every American, and would eliminate thousands of jobs in the energy sector.” This looks like another fully unsubstantiated statement. From my understanding renewables is and will create jobs.

Could you please send some substantiation for this statement also?

retired in West Liberty
View all posts by Dave Bradley →
This entry was posted in #trumpresistance, Blog for Iowa, Climate Change, Joni Ernst. Bookmark the permalink.