It appears that Dear Leader’s feelings were deeply hurt by his new love, Kim Jung Un while he was there. With any luck, maybe one of those band-aid Purple Hearts that Republicans used at their 2004 convention to mock a real war hero and great American John Kerry, are still around and Dear Leader can award himself one of those Purple Hearts for his hurt feelings. 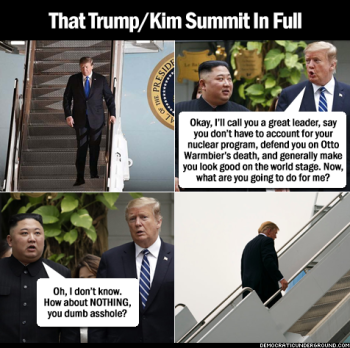 a big tip of the hat to EarlG at democraticunderground.com

With any luck, the justice system will be giving Dear Leader a large chunk of uninterrupted “executive time” to consider his feelings for Kim.

BTW, why didn’t we hear Republicans screaming at Michael Cohen when he was obviously lying when they were in charge of the House Oversight Committee?

It was a bad day at Black Rock for our reality TV president last week.

Apparently after their antics for the TV cameras Wednesday, Republicans on the House Intelligence Committee couldn’t find time to show up for Cohen’s Thursday closed door meeting. No cameras, no Republicans. Governing can be tiring. Maybe Steve King would show up because he wants to be on any committee right now.

BTW the High Holy Days of Basketball are upon us. We shall be watching!

“Cohen’s lies to Congress were about Trump being innocent. Also, said crimes were committed for, with and at the behest of Donald Trump, which is why Rep Jordan chose to, er, look the other way.”