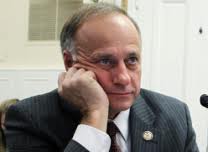 doubt he cares much

Apparently stepped on some monied toes.

Tuesday morning started with an interesting blurb in the news. State Senator Rick Bertrand of Sioux City publicly acknowledged that he was considering a run against Congressman For Life and More Steve King. What a blasphemy. King is the face of GOP politics in Iowa. Hearing he was getting a challenge certainly piqued some curiosity. For one thing it is quite late in the game for an announcement like this. The deadline for filing papers to run for congress is March 18th, less than a month away. Usually runs like this do not appear to be spur of the moment.

Even Steve King himself seemed to be mystified.

King today said he doesn’t know why Bertrand might be “motivated” to challenge him.

“I don’t remember Rick ever contacting me with any issue that he was concerned about,” King told KSCJ Radio.

“IA-04: Rep. Steve King is best known in DC for his many stupid and offensive quotes. His career can perhaps be best epitomized with his declaration that, for every child of an undocumented immigrant “who’s a valedictorian, there’s another 100 out there who weigh 130 pounds and they’ve got calves the size of cantaloupes because they’re hauling 75 pounds of marijuana across the desert.” But he’s probably Iowa’s most powerful social conservative, and prominent local business conservatives have been comfortable letting King shoot his mouth off. But King may have finally touched the third rail of Hawkeye State politics and earned himself a primary challenge.

King is a longtime supporter of ethanol, a fuel that’s made up of a ton of Iowa corn. But Ted Cruz, who probably owes King his victory in the state’s presidential caucus, has been reluctant to promote pro-ethanol laws like the Renewable Fuel Standard. Ethanol lobbyist Eric Branstad, the son of Gov. and Cruz hater-in-chief Terry Branstad, has made it no secret that he’s furious at King for backing Cruz, and the ethanol industry and GOP operative Nick Ryan have been reportedly trying to recruit a primary challenger for King. And they may have finally found their man: State Sen. Rick Bertrand said over the weekend that he’s “strongly, strongly considering” running against King. The filing deadline is March 18, so if Bertrand wants to run, he’ll need to decide soon.

If Bertrand gets in, it’s not going to be easy for him to beat King. Social conservative voters are a powerful force in western Iowa GOP politics, and it’s very tough to see their praetor losing. And as the Iowa Starting Line points out, Cruz did well in the 4th District at the beginning of the month, so King’s support for him is hardly an automatic scarlet letter with voters. But the ethanol industry’s support could give Bertrand access to money. King only had $119,000 in the bank at the end of December, so Bertrand could definitely outspend him. Romney won this seat 53-45 and King turned back well-funded Democratic foes, and it doesn’t look like Team Blue will have a strong candidate who can capitalize on any GOP chaos.

1 Response to Republican Icon Steve King May Be Primaried