Tucker And The Bolshevik Factory 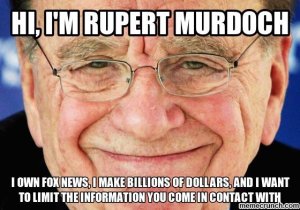 It really is progress that we are now finally talking on TV about Fox News being a propaganda network. For a long time it was a taboo topic. It wasn’t that long ago that Elizabeth Warren shocked everyone by saying on The View that she would not do a town hall on Fox because of Fox being not news but a propaganda network.  Gasps from the crowd including the show’s best liberal Whoopi Goldberg.  So I was happy to see Jim Acosta laying it all out on CNN.  I just hope we’re making progress fast enough.

“Just as Tucker and the Bolshevik factor are putting our democracy in peril acting as a mouthpiece for Putin, they are doing something perhaps even more destructive. With the US approaching 1 million deaths from Covid, Fox and the people ultimately in charge there, the Murdoch family, are inflaming a public health crisis.

To the Murdoch family, it’s your network. You own this. You own Tucker’s program that is putting all of us in peril for ratings – for money – so these American oligarchs can keep pumping out bullshit into our homes. Now if only there were a vaccine for all of that.”