Well, we would be remiss if we didn’t note the Iowa State legislature will be back in session tomorrow. Don’t expect them to do anything good for the state or the people of Iowa. As all the political prognosticators  do not forecast an active session I think we can expect Republicans to do all they can to continue to turn Iowa backwards.

Rather than spend some money to fix a few things like highways, bridges and school buildings expect big tax cuts, especially for the rich. Tax cuts are a big seller just before an election. Who cares if a bridge falls in?

Well, once again it was an interesting week as the anti-democratic party continues to run toward an authoritarian government.

A) In a speech, who said the those who attacked the capitol January 6th, 2021 “held a dagger to the throat of America.”?

B) He was the first black man to win an Academy Award for lead actor. Sidney Poitier died Friday at age 94. What country did Poitier hail from?

C) What top men’s tennis star was refused entry into Australia for the Australian Open due to his not having been vaccinated against Covid?

D) What country claimed to have conducted a second successful test of a hypersonic missile Thursday?

F) The Red Cross in Iowa is reminding Iowans that they are critically short of what?

G) What US senator humiliated himself by going on Tucker Carlson’s show to apologize for his speech calling the attack on the capitol on January 6th “a violent terrorist attack”?

H) Stephanie Grisham is heading up an anti-Trump group in the Republican Party. What was her role in the previous administration?

I) What so called Fox journalist was outed as a major advisor to the former president?

J) Who was the only Republican member of congress to come to the floor of the US House to join in a moment of silence for the commemoration of the events of January 6th?

K) Russia has sent troops into what neighboring country as violent protests rock that country?

L) What governor disappeared for 17 days and upon reappearing seemed to show distinct signs that he had Covid?

M) What soon to be top US official was in the DNC headquarters in DC when pipe bombs were found near the building last January 6th?

N) As  the US experiences space success with the James Webb telescope, what country experienced failure as a rocket it launched December 27th crashed into the South Pacific?

O) What official from the previous administration basically admitted that the January 6th insurrection was a planned coup on the Ari Melber Show on MSNBC last week?

Q) The east coast suffered severe weather this week with hundreds of drivers get stuck for over a day on I95 in what state?

R) Elizabeth Holmes was found guilty of 4 of 11 charges for defrauding investors of what Silicone Valley startup?

S) This man who is he only person to ever defeat Barack Obama in an election, announced that he would retire from the House after his term ends next January?

“The way Joe Biden spoke of Donald Trump was very impolite, partisan, and will divide us.”

We’d all be arrested today if we went on MSNBC or any news outlet and admitted to being a co-conspirator of the attempted coup plot on Jan 6 like MAGA lunatic Peter Navarro did, so much so that he named it and called it the Green Bay Sweep. That’s just a fact. – Ricky Davila 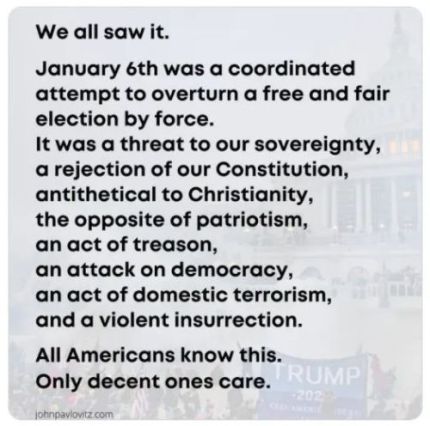