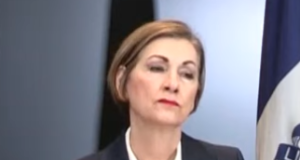 This seems to be a recurring theme in the Republican Party. Democrats do the hard work of drafting and passing legislation over the near unanimous opposition from Republicans. Then when programs are put in place, Republicans jump in front of the parade and claim credit.

We have seen Miller-Meeks and Hinson both do this earlier this year. Now Reynolds joins the undeserved credit taking crowd. From our friends at Progress Iowa who are great at calling out the continuing Republican hypocrisy:

DISHONEST: Reynolds Piles On One Lie After Another

Des Moines, Iowa — Progress Iowa executive director Matt Sinovic issued the following statement in response to the investments in child care announced today by Gov. Reynolds, that are only possible because of federal programs that she opposed:

“The Governor is being downright dishonest. Period.”

“Cindy Axne has fought every day to support our families and children. Meanwhile Reynolds opposed the American Rescue Plan, but now wants to take credit for their hard work.”

“The Governor should be ashamed, give credit where it’s due, and every story written about this program should make note of her opposition, as well as who is actually responsible.”

In the email Progress Iowa includes the governor’s release. I will forego that here. I refuse to give her unwarranted publicity.

Another email that just came in from Progress Iowa about Reynolds:

STATEMENT:  Iowans want to be safe while Reynolds plays politics

“Iowans want to go to work safely. We want our kids to go to school safely. We want to go out to eat and enjoy time with friends and family during the holidays safely. Governor Reynolds has failed to keep us safe during this pandemic, and more than seven thousand in our state have died. Now she’s joining a lawsuit that is pure politics, that would make it harder for all of us to stay safe and healthy.”

As we talk about Reynolds let me add that it was shameful of Covid Kim and the Iowa legislature to use the special session to pass a law to try to stop vaccination mandates in Iowa by the federal government and to pay unemployment insurance to those who quit their jobs for being vaccinated.

Call me old fashioned, but isn’t the governor’s job to protect the public health? And not make public health worse and the virus healthy? Seems like a simple concept. And isn’t the purpose of unemployment insurance to help those who lose their job due to things they can’t control such as layoffs.

I have been lectured more than once by a Republican who is more than willing to tell me that UI is NOT MEANT FOR PEOPLE WHO QUIT THEIR JOBS. Seems like this is a really bad precedent to set. Paying UI to people who quit or lose their job for failure to follow orders.

They can try to sell it as freedom, but freedom don’t mean much when you are dead.  Plus what about others you infect, what about their freedom?

Somebody sure should have left a “How To Governor For Dummies” for Covid Kim to follow.

Oh and if you are looking for a religious exemption, it should be something that you have done all your life not just because Saint Tucker Carlson told you to.