Once Again Democrats To The Rescue! 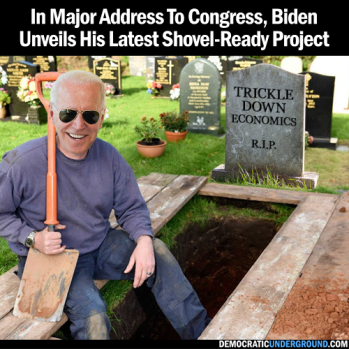 hat tip to EarlG at democraticunderground.com

For the second time in slightly over a decade a Democratic President stepped into the most powerful office in the word with the country in gawd awful mess, the economy in tatters, the country purposely split on cultural issues for political purposes and most recently the country in the midst of a horrible pandemic that was never addressed by the previous administration. Oh, yeah, did I mention a world wide climate crisis?

As we look back on the first hundred days of the Biden Administration actions and plans are in motion or planned that will rebuild the country and lay the foundation for an economy that works for all:

President Biden on Wednesday pitched his plan to hike taxes on the wealthy and corporations, saying “trickle-down economics has never worked.”

“It’s time to grow the economy from the bottom and the middle out,” the president said during his first address to a joint session of Congress.

This is certainly not the first time a Democratic president has come in to office following a Republican president who has left a giant mess. The country’s politics have lurched from Republican excesses and crashes to Democratic rescues for the past century. Maybe, just maybe the extreme excesses of the last administration was more than a majority of Americans are willing to take anymore.

When we go back a century, we have the excesses of Harding, Coolidge and yes, Iowa’s own Herbert Hoover. While the 1920s were known as the “Roaring ‘20s” much of what made it roar were major imbalances in the economy with an extremely rich upper class and a large poor lower class. When Herbert Hoover took office the Roaring ‘20s had flamed out and the economy came crashing down in the worst international depression ever seen.

On March 4th, 1933 Franklin Roosevelt stepped in, with the backing of a Democratic congress, and immediately put the government to work creating an economy for all Americans. Immediately the economy and lives began to improve. By the end of FDR’s first term, the US was in a much more solid place.

Programs were put into place that would make it much less likely that the whole economy would fail at one time. If there were indications of that happening would trigger mechanisms to undergird the economy through various ways to pump stimulus into the economy to keep it from collapsing.

FDR and his successor, Harry Truman handed a robust country over to Dwight Eisenhower. While Eisenhower’s Administration did not crash the economy, it was decidedly weak when Jack Kennedy came Ito office. Within the first year Kennedy restored vigor to the economy. Despite his troubles in Vietnam, Kennedy’s successor, Lyndon Johnson kept the economy rolling.

By the time the Nixon/Ford Administration was done inflation had created an economy that was leaving most Americans behind. Inflation was eating any progress working Americans were making. While Jimmy Carter was unable to quite tackle the mess left him by Ford.

The 1992 election was highlighted by the phrase from James Carville “it’s the economy, stupid!” This illustrated that after 12 years of Republicans in the White House, especially with their imposition of “trickle down” economics, the economy was very weak and once again working Americans took the brunt of the pain.

Bill Clinton stepped in, blunted the trickle down economics and raised taxes on business and the wealthy. The economy soared.

When GW Bush became president one of his first acts was to reimpose trickle down. This plus a long sustained unpaid for war nearly collapsed the world wide economy. In November of 2008, Americans called on Barack Obama and Joe Biden to literally pull the world economy from the brink of disaster.

Through steady leadership and solid policy by the time Obama left office, the economy was zooming. Sadly it seems like once Americans have a buck in their pockets, they forget what they have learned. Despite losing the popular vote by a huge margin, the last president came into office and went about reversing all Obama policies. Once again trickle down economics were imposed.

It usually takes a while for trickle down to erode the economy. Since the huge tax cuts were not put in until December of 2017. Trickle down was already eroding the economy when the pandemic sent the economy reeling.

We have taken a long look at the mismanagement of the economy by Republicans for a century with emphasis on the damage done by trickle down policies. The pattern is obvious. Republicans destroy the economy in such a way that only the wealthy make huge gains and the rest of us lose. Democrats restore balance and we all win.

This pattern has been very apparent since the Reagan years, yet Americans still fall for the flim-flammery of Republican promises. I guess because there are enough people who see themelves as the one who will make a huge killing under Republicans.

retired in West Liberty
View all posts by Dave Bradley →
This entry was posted in Biden-Harris, Blog for Iowa, Economy, Republican Policy and tagged Democrats save the economy, trickle down economics. Bookmark the permalink.
Loading Comments...
%d bloggers like this: