Every farm kid knows you should card wool before spinning it into yarn.

They don’t intend on getting the story right. They cast aspersions on their opponent’s character with disregard for facts and reasonable discourse.

On Monday, Aug. 24, Ernst released this statement on her campaign website:

“The American Dream is to own a home, which is why it’s so sad that while she was the President of Rottlund Homes, real estate executive Theresa Greenfield’s company was sued in Polk County for fraud, negligence and reneging on property purchase agreements,” said Joni Ernst spokesperson Melissa Deatsch.  “For Greenfield, it’s always about looking out for herself. Once Rottlund Homes went bankrupt, Greenfield quickly jumped to Colby Interests and continued to put herself before others.”

Deatsch is saying: 1. Greenfield “quickly jumped” from Rottlund Homes to Colby Interests, and 2. she is implicitly guilty because Rottlund Homes was sued.

That’s a lot to swallow. Let straighten this the way we would card wool.

Let’s start with the LinkedIn profile Ernst wrote they accessed May 14, 2019. Here is the relevant part: 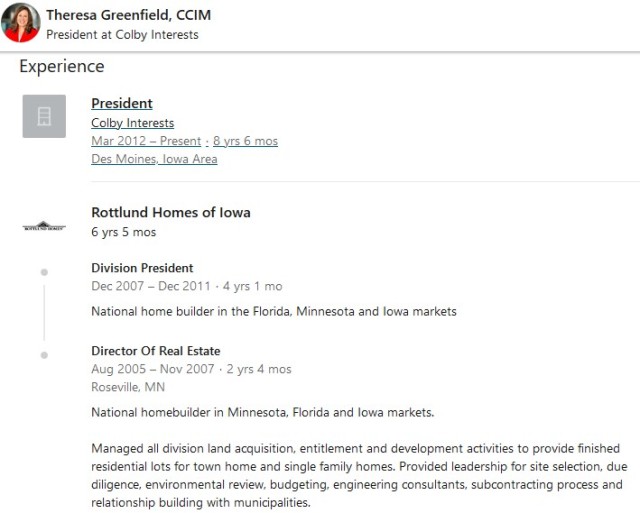 Greenfield wrote she was unemployed from December 2011 until March 2012. She has been quite open about her experience with Rottlund Homes and how she lost her job during the real estate crash of the Great Recession. She told me earlier this year,

“From there I went into home building and eventually became the president of a small home building company in Iowa. That was fun through the recession, until it wasn’t any more fun. We sold the assets at the end of 2011. I became unemployed like a lot of people in the recession, then hired on with a commercial real estate company.”

For Deatsch to say Greenfield “quickly jumped” from job to job simply isn’t true. It was a recession caused in part by turbulence in the real estate business for Pete’s sake. With 100,000 Iowans out of work during the coronavirus pandemic Ernst is criticizing Greenfield for being laid off almost ten years ago? Now that Ernst is a U.S. Senator what is she doing for Iowans who are unemployed? That’s not a rhetorical question.

Let’s talk about the three lawsuits Ernst raised. It is part of business life that companies get sued. How responsible was Greenfield for these lawsuits? Ernst mentions people sued Rottlund Homes but says little else. The plaintiff is not always right and regular people know that. If you look at what happened, much of the basis for the lawsuits was out of Greenfield’s control and all three were resolved through legal process. What’s the beef?

James and Sheryl Moon: A deal between the Moons and Rottlund occurred in 2005, before Greenfield joined Rottlund Homes of Iowa in 2007. The Moons dismissed their case against Rottlund with prejudice and both parties waived claims for attorney fees.

The Reserve Homeowners Association: The Reserve was built around 2005, and the neighborhood started to experience water pooling problems in 2006. Both occurred before Greenfield joined Rottlund Homes of Iowa in 2007. The Reserve Home Owners Association trial against Rottlund was cancelled because Rottlund was put into receivership in Minnesota to liquidate their assets and all pending litigation was stayed. The lawsuit was dismissed with prejudice after both parties agreed to dismiss the case.

Did Theresa Greenfield become president of Rottlund Homes of Iowa? Yes, she did, in 2007. Were there lawsuits? Yes, there were. Are those lawsuits long resolved? Yes, they are. How about we quit changing the subject by casting aspersions on Theresa Greenfield’s character and do something for the thousands of Iowans who are jobless because of the coronavirus pandemic?

While Joni Ernst claims to be fighting for Iowans, Monday’s attack shows how out-of-touch she is during the current and greatest economic crisis since the Great Depression. The Ernst campaign is criticizing and casting aspersions on Theresa Greenfield’s character at a time when: over 100,000 Iowans are unemployed, Iowa had record unemployment of over 10 percent in April, the GOP-led Senate, where Ernst as part of leadership, failed to renew needed extended unemployment benefits, and earlier this year, Ernst sought lower unemployment payments in COVID relief.

A person can spin from the lock but who would want to wear the garment, all lumpy and itchy? While Joni Ernst remains a Senator she should quit distracting, get to work for Iowans, and quit trying to persuade us her lockspun is cashmere.

Iowans are just going to shake it off.