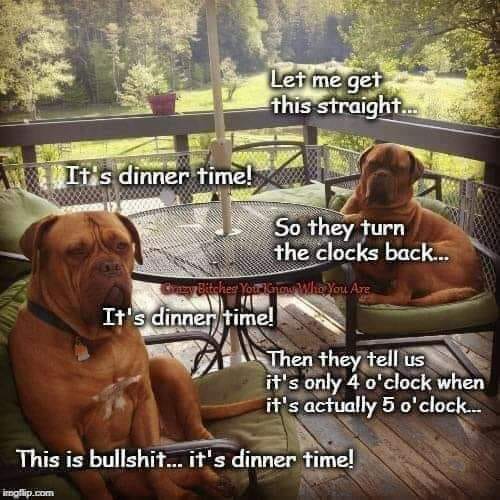 A tip of the hat to http://all-hat-no-cattle.blogspot.com

Here we go again. Along with changing the clock you get to listen to my semi-annual complaining about changing the clock. What an insane system. We will now go through two weeks of people being all goofed up because the time on the clock doesn’t match the time in their minds and bodies. So we go through re-adjustment that will just about be complete when it will be time to change again.

All this so some folks can barbecue an hour later in the summer and candy companies can sell more Halloween candy in the fall.

This year we (our family) have an extra layer of confusion. One daughter has moved into a state that (of all the sanity) DOES NOT change its clocks. Not in the fall, not in the spring, not for any old thing. I have warned her not to be surprised if I lose track of time,  her time and my time, and call her in the middle of the night someday. Or the middle of somebody’s night anyway.

Well, one thing is for sure, spring or fall the Donald mob will keep the crime up.

Donald Trump could stand in the middle of Fifth Avenue and shoot someone and freelance Drunk Driving Poster Boy and professional moron Matt Gaetz would harass the living f*ck out of the detectives trying to do their jobs. – Jeff Tiedrich