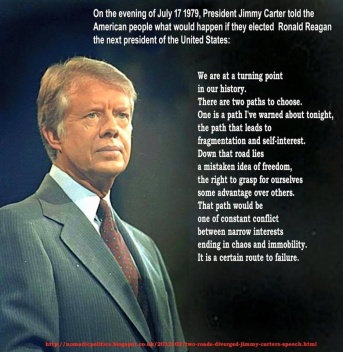 President Carter tried to warn us at the beginning.

“Go back to where you came from!” When I heard that tweet from Dear Leader I remembered the first time I heard it and understood what it meant. I was around 12. There was no mistaking it was a racist comment then. Every time I have heard it uttered since then there was no doubt that it was meant as a racist remark.

When Dear Leader tweeted that four Democratic congress women should “go back where they came from” there was no doubt exactly what it meant. Any story that he didn’t know what it meant has to be a lie. There may be a few truly disconnected humans in this country that don’t know what that phrase means, but that is doubtful.

Among the voluminous stories on this tweet that have come out this phrase has been cited as a specific phrase that can get you fired from most jobs in the US. So there is little doubt that Dear Leader didn’t know what he was saying.

What Dear Leader is doing is not leaving any any doubt that race will be an issue in the next election. Race was actually perhaps the major issue in 2016 but was not named out loud. In 2016 the first speech Dear Leader made was about race and he just went from there. It was a bit more covert in 2016, covered by questions of things like immigration or “patriotism.” This time it looks like he and his base are ready to be much more open.

What is surprising is that there were very few in his party, almost no one, who immediately called Dear Leader out for his terrible tweet. To a person there was an eerie silence in the Trump Party. The silence was only broken by fearful congressional leaders trying to defend this ignorant tweet. When the tweet was followed by a rally in Greenville, NC Wednesday, the lack of condemnation was again deafening.

What else must be understood is that there is also a real misogyny in Dear Leader’s actions. If you are keeping score, Dear Leader almost always lashes out against women. From Hillary Clinton to Elizabeth Warren to the US women’s Soccer team to now the congress women. Like all bullies, Dear Leader attempts to attack weaker opponents.

Dear Leader and the Trump Party, if they get away with this, will not stop there. Eventually there will be only a few acceptable people according to them. We have seen this movie before with different casts, but the very same concept.

Perhaps the most disconcerting thing about this whole incident and the others like it is the silent consent by nearly the whole Trump Party. The few who have said anything have spoken mainly to defend Dear Leaders actions.

Iowa’s members of the Trump Party in Washington. Oddly, Steve King who suddenly became a persona-non-grata in the Trump Party after the Party took a major thumping in the election of 2018 and King’s overt racism was seen as a cause. This would have been a good spot for King to speak up. What a silly thought. King saying something about Dear Leader doing the same thing King himself did.

Perhaps the one that amazes me is Joni Ernst. Once again Ernst talks a good game but does little. She let women down with her vote for Kavanaugh for SCOTUS. Now, according to radioiowa.com, Ernst didn’t exactly condemn the tweets:

Reports say Iowa’s other U.S. Senator, Republican Joni Ernst, when asked Monday if she thought Trump’s comment was racist, said, “Yeah, I do.” Later, Ernst was asked by a CNN reporter to repeat her statement as to whether the comment was racist. She responded, “Uh, yeah. They’re American citizens,” and called the president’s comment “not constructive” and “not helpful.”

And while all this foofarah is drawing our attention in that direction the administration continues to dismantle all sorts of regulations and rules that have helped build the strong country that we have enjoyed over the many decades. While Dear Leader pushes to strengthen his base his administration works hard to dismantle the very government we all depend on for something. After promising health care and maintaining Social Security and Medicare, these have become the top targets with nothing to replace them.

And in the end, Dear Leader is giving his base the hate that they want while he picks their pocket day and night and dismantles the programs they will need. Meanwhile, as the government begins to look like a Jenga tower just before its big collapse, representatives from Dear Leader’s party pretend nothing is happening.

This all reminds me of a quote from LBJ on how to divide and conquer in US politics:

President Lyndon B. Johnson once said, “If you can convince the lowest white man he’s better than the best colored man, he won’t notice you’re picking his pocket. Hell, give him somebody to look down on, and he’ll empty his pockets for you.”

Dear Leader divides and conquers. Members of Dear Leader’s party are so scared of him they will not stand up for what is right. Cowardice in leadership leads to failures in government all the time.

retired in West Liberty
View all posts by Dave Bradley →
This entry was posted in Blog for Iowa. Bookmark the permalink.

1 Response to Playing The Oldies