Jay Inslee At The Cedar River 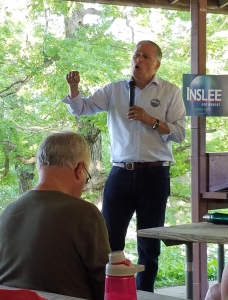 CEDAR RAPIDS, Iowa — Saturday afternoon I drove to the Overlook Pavilion in Ellis Park where State Senator Rob Hogg had organized a “climate conversation” with Washington Governor Jay Inslee who is an announced candidate for president.

Hogg reminded us of the 2008 Cedar River flooding. The river was visible behind him.

It is hard to forget the 2008 flood that devastated Iowa’s second largest city. On my way to the event I compared flooding levels of the Atherton Wetland on Ely Blacktop which had been covered with flood water in 2008. From the center of Cedar Rapids I used First Street Southwest, which runs next to the Cedar River, to find the park. On the eastern bank someone had built a flood wall. An earthen berm restricted the view of the river on some parts of First Street. The low-lying area had been inundated in 2008 causing damage to more than 5,000 homes, evacuation of 25,000 people, and roughly $4 billion dollars damage. The flood was made worse by climate change.

In his introductory remarks, Senator Hogg recognized elected officials and organizations present and encouraged the almost 200 attendees to engage in the Iowa caucus process of meeting with presidential candidates. Hogg added later, “with the spirit of citizenship, we can bring Americans together for climate action we so urgently need and the many climate solutions that work.”

Governor Inslee began his remarks with the reason he seeks to defeat climate change, his grandchildren. “We have a moral obligation to the young people of America to defeat climate change,” he said. Noting last week’s atmospheric carbon dioxide concentration was 414.42 ppm (only slightly less than the record (415.70) set May 15), he added, “It is time to act on climate.”

Defeating climate change would be the first priority for an Inslee administration, the governor said. It was a “predicate for success” in all policy areas. If addressing climate change is not job one it won’t get done.

Inslee split from environmental groups like Citizen’s Climate Lobby when he said he did not support a tax on carbon. He favors regulatory reform to reduce carbon emissions. Based on his experience in Washington State, voters are unlikely to accept such a tax, he said.

Inslee asked for help in two areas of his campaign.

While he met the qualifications to participate in the first two debates being hosted by the Democratic National Committee, he has not met the 130,000 donor threshold to participate in the third and fourth. He encouraged those present to donate one dollar or more to his campaign and ask friends and family to do likewise.

Inslee wants the Democratic National Committee to devote one candidate debate to climate change so every participating candidate can lay out their plan to defeat it for voters to see. The request has been rejected, making supporting Inslee the best way to make sure the topic is covered during the debates, he said. Holding a climate change debate outside those sanctioned by DNC is not an option.

“It is the DNC’s job to organize the debate schedule, and the ground rules on unsanctioned debates were made clear with all the candidates, including Governor Inslee, and media partners months ago,” DNC spokesperson Xochitl Hinojosa told Mother Jones. The DNC welcomes candidates to join issue-specific forums instead.

The thrust of the conversation was Inslee has a positive progressive record in Washington State and wants to take that success to Washington, D.C. To learn more about Governor Jay Inslee, visit his website at JayInslee.com.

The Inslee campaign posted video of the event here.