It is rather amazing that the problems that Franklin Roosevelt had solutions for nearly 80 years ago but didn’t have time to get them enacted are still the very basis of our problems today. The Four Freedoms and The Second Bill Of Rights were FDR’s proposals to address these issues. Next Friday will be the 74th anniversary of the shock of FDR’s death.

This is not a political ineptitude of Roosevelt or his party.

This is a testament to the incredible power that Republicans have asserted over that period of time of stopping most any progress the country has attempted. In the mean time they have taken an economic system that had some balance in the distribution of resources (wealth) and have turned it upside down into a system where the top .1% reaps most of the rewards of economic advancement. 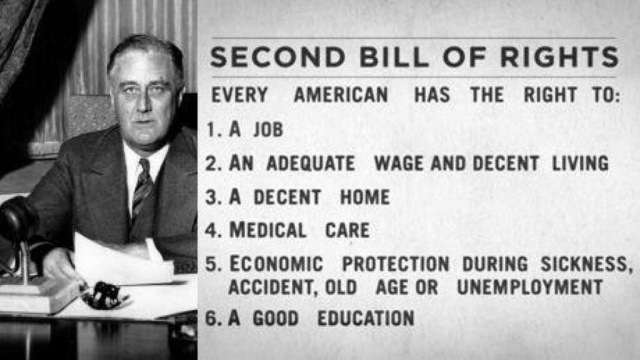 With the unequal distribution of resources has been an attendant political maldistribution with political power flowing to those with economic power. We all know that the Citizens United v. FEC decision in 2010 was the capstone of making political inequality systemic. We have gone from “one man, one vote” in the Warren Court era to “one dollar, one vote” as pronounced by the Roberts Court.

Most of the Democratic candidates are returning to the classic Democratic values as first pronounced by FDR. You can bet Republicans will fight tooth and nail with every dollar can get their mitts on.

Just look what they were able to do in 2016 with their dollars. They have bought incredible gerrymandering and voter suppression that has tilted the playing field drastically to one side.