No Funding For Schools; No Taxes On Some Corporations

It surely is a strange situation when we have our Republican legislators tell us out of one side of their mouths that there is no money for Iowa schools to maintain the status quo, yet from the other side of their mouth the can tout all the tax cuts they have garnered for their rich contributors. Once again, Iowa Fiscal Partner brings this to light. Once more I suspect that few will read the report and fewer still will do anything about it.

IOWA CITY, Iowa (Feb. 11, 2015) — More companies are benefiting from a lucrative tax subsidy that permits large, profitable corporations to get checks from the state without paying any Iowa income tax.

The latest annual report from the Department of Revenue on the use of the Research Activities Credit (RAC) shows that 248 companies claimed $51 million from the program in 2014, one-third more than the highest number of companies in the last five years.

“Most notable is that Iowa continues to give a lot of money to companies that aren’t paying income tax. There were 181 companies that received RAC checks from the state because their tax credits exceeded their income tax liability,” said Mike Owen, executive director of the nonpartisan Iowa Policy Project in Iowa City, part of the Iowa Fiscal Partnership.

“The $35 million that went to those 181 companies could have provided 1 percent supplemental state aid for public schools, or it could have gone to other public services, if it had been part of budget discussions. But the state does this kind of spending outside the budget process.”

The report, released Wednesday, also shows:
— Only 16 companies — or 6.5 percent — claimed 83 percent of the benefits and at least 75 percent of the checks.
— Those 16 companies each had at least $500,000 in claims, totaling over $42 million in 2014.
— The top five companies benefiting from the credit have been the largest beneficiaries over the last five years: Rockwell Collins, Deere & Co., Dupont, John Deere Construction and Monsanto.

“Those are highly profitable companies. We need to be asking whether it makes sense, when school budgets are tight and enforcement of environmental and workplace laws are weak, to be subsidizing these businesses to do research that they already would have to do, and can afford to do on their own,” Owen said.

Owen noted a special tax credit review panel appointed in 2009 came back in 2010 with many recommendations to curtail spending on business tax credits — including elimination of the so-called “refunds” of the research credit.

Rockwell Collins was the biggest corporate beneficiary in 2014, with $11.7 million in claims, followed by Deere at $9.4 million and Dupont at almost $6.9 million. 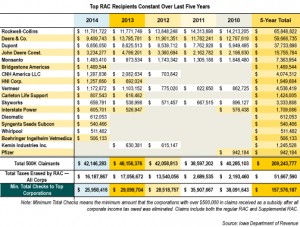