David Young The Tea Party Pick In The 3rd 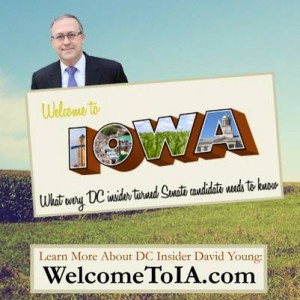 At the 3rd district convention in Urbandale Tea Partiers picked former Grassley staffer David Young for their candidate to oppose Democrat Staci Appel in the November general election. Young defeated Brad Zaun on the fifth and final ballot. Zaun led throughout the voting, but leveled off as the voting went on while Young continued to pick up steam throughout the ballots. Young went over the top when the ballot came down to the two men. You can find a round by round vote and story here:

Based on his web site (you can look it up yourselves) it looks like he toes the tea party line on issues: repeal the ACA that has insured nearly 15 million more Americans, flat tax that would a disaster for the poor, pro-gun and against women’s reproductive rights. While it doesn’t say so on his page I would bet he would love to take your Social Security and bet it for you on Wall Street while the fund managers take a heaping helping right off the top.

Wonder if he has gotten a call from any of the Koch front groups offering a bag of money yet? So let’s welcome in another tea bagger pushing policies that will shove America backwards in a hurry. David Young is not what Iowa or America needs to solve problems like climate change, money in politics, job creation, student debt, the declining middle class and many, many more.

Staci Appel is talking about those issues and offering solutions. David Young wants to end the ACA and send America back to the middle of the last century.

retired in West Liberty
View all posts by Dave Bradley →
This entry was posted in 2014 Election Campaign and tagged 3rd congressional district, David Young. Bookmark the permalink.
Loading Comments...
%d bloggers like this: