Posted on January 23, 2014 by bfiajohnshumaker 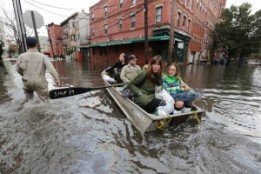 Well, Cris Crisco beat the butterball turkey to a crapshoot down on the boardwalk at Atlantic City while the citizenry was boarded up and blown away by DEVASTATING Hurricane Sandy, using shady backroom armtwisting, blackmailing and stonewalling of two mayors who desperately needed federal funds to help their people recover from the storm. And Cris Crisco held them up, shut them down and shook them down for political favors; from Crisco the Lard man who porkbarrels and falls all over himself for his developer bankster chums; of Course, Grassley and Branstad know nothing about this…
Nothin like good ol republican chicanery and Grand Theft right at the very top,
“Blowin in the wind” takes on a whole new meaning,
John Shumaker

The company at the center of a growing controversy in Hoboken, New Jersey that is fueling Governor Chris Christie’s woes is a major political player that spreads around campaign cash.   Talking Points Memo’s Hunter Walker details how the Rockefeller Group spends money on both parties, though most of the cash goes to Republicans.