Is Grassley Losing It? 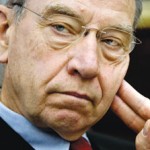 Yet another headline showing our once respected senior senator acting like a baby in front of the nation. Tuesday, Grassley complained that President Obama “doesn’t call him anymore.” During the time leading up to the passage of the health care reform bill, Obama treated Grassley as about the most important person in the world. This, despite what most in the country could see, not only Grassley dealing with Obama in bad faith but almost with scorn. Obama bent way over to work with Grassley on health care, even asking for changes to satisfy Grassley. But Grassley would have none of it.

After treating the President like a disease, Grassley wonders why he doesn’t call? Is that the way you treat people, Senator? But this is hardly the only incident with Grassley recently that has to make you wonder if Grassley is connected to the real world sometimes. Just last week, Grassley came up with a unique answer to senate Republicans’ refusal to act on Obama nominees to the DC federal court bench. That court is designed to have 11 judges. Some of the most important and intricate cases come to the DC court, especially business cases. Why they have 11 judges I do not know, but it has been that way forever and as far as I know no one has ever questioned it.

But with the senate Republicans refusing to even give Obama nominees a hearing, Grassley came up with a novel claim when he said that Obama was trying to “pack the court” by nominating justices to fill vacant seats. He then went on to suggest that Obama leave the seats unfilled and thereby reduce the number on that court. Part of a president’s constitutional duty is to fill vacancies on courts and regulatory bodies. Duty, Chuck.

Grassley is also ramping up his criticism of an immigration bill that was hammered together by a special group of eight senators, 4 Republicans and 4 Democrats. When the bill was first sent to the Judiciary committee, Grassley offered 77 amendments to the bill.  He is not planning on allowing any immigration legislation, thus making those in the limbo that exists roast that much longer.

These are just a few examples of our senior senator acting sometimes like a spoiled two year old, sometimes quite arrogant, but recently mostly like a tea party member whose only mission is to obstruct anything that the Obama administration or Democratic leadership in the senate tries to do. He certainly has disdain for what Iowans care about. He voted against expanding background checks, even though nearly 70% of Iowans want background checks expanded.

I could spend a great deal of time listing things which Grassley has done over the years. But every time I hear something anymore, it makes me wonder if he is slowly losing touch with things. This recent complaint about President Obama not calling him is almost silly. In the rough and tumble of Washington politics, he wants Obama to be his friend despite the fact that he (Grassley) has made it abundantly clear to the world that he had nothing but disrespect for Obama? His recent actions and pronouncements seem to be erratic at best. Scares me to think that this guy is in charge of some of the most important committees in Congress.

It is a shame that Grassley couldn’t have been removed from office in 2010, despite his strange pronouncements that Obama wanted to “pull the plug on Grandma” and then his denials that he said it.

We get another opportunity in 2016. But we need to make sure that Iowans understand that it is well past time that Grassley be sent home to cut his grass.

retired in West Liberty
View all posts by Dave Bradley →
This entry was posted in Charles Grassley and tagged Obama doesn't call me, pack the court, pull the plug on grandma, vacant judicial seats. Bookmark the permalink.

3 Responses to Is Grassley Losing It?