Looking Out About 65 years 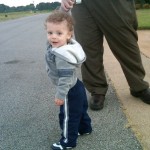 We have a grandson. This doesn’t make us much different than a lot of people. And like most grandparents, we are often much more worried about the life he will experience than we are about the few years we have left.

For one thing, some folks 75 years ago looked out for us as did some folks 50 years ago. Government programs such as Social Security were put into place 75 years ago. These programs were not set up as a retirement program, but as a buffer between what was then a major problem – the elderly dying in wretched poverty. Some thought that if folks had lived a long life, they had probably contributed to society in many ways and did not deserve to die in poverty and squalor.

And once again the government decided that old folks should be guaranteed medical care. At that time the cost of medical insurance rose dramatically as a person aged much as it does now. And at that time many of the elderly had lived through the great depression, so they had little savings and no money for medical insurance. So the government took on the job as being the insurer of last resort for the elderly. Now here am I and my contemporaries about to take advantage of that forward thinking.

These programs and others like them were put together by a majority of the society to address problems that would be certain to happen. As America accumulated wealth, a majority of our leaders decided that it made sense to have some of that wealth benefit those in society who may not have had opportunities others had or had simply outlived their usefulness.

So in the past we have had leaders who looked far beyond tomorrow to build a society that many believe is a much better society to live in. But in recent years our society has gotten much more selfish and the idea of helping someone not “worthy” now raises the hackles on many of our leaders. Now there is a movement to take money from the safe security of the government bonds and give it to the Wall Street banksters to gamble on what has become a casino.

With that as background, you can see why as a grandparent I worry. Here we sit on the precipice of a new administration. I am working for a candidate that I believe is capable of some of this long range thinking. Mr. Obama has shown that long-range thinking about all of society is part of his make up. Mr. Romney on the other hand seldom thinks beyond today and his circle of friends and the next big score.

Our grandson’s generation will be encountering some very serious problems that the anti-governing group has decided to leave on their doorstep. Problems such as corrupt elections due to money,  unreliable voting machines and laws that exclude citizens, global weather change that actually threatens to destroy many habitable areas and of course world wide economic uncertainty brought about by unfettered capitalism.

But for sure the same old problems will still exist that have persisted since at least the beginning of the industrial revolution – incredible inequity between the rich nations and the poor nations; within nations incredible inequity in the distribution of wealth or said another great poverty and hunger amid great wealth. It seems like the income gap shows no signs of turning around.

In 1980 George H. W. Bush called the economics espoused by Ronald Reagan “voodoo economics.” He could not have been more right. America has been under the spell of these “voodoo economics” for the better part of 30 years. During that time we have become a much more callous country. If we elect those who believe in the voodoo economics, the next step will be austerity. This will be a disaster.

So these are the very things that cross my mind as I go to vote. We need a leader who can see out past his own interests; a person who will include all of society not just his own class; a person who understands that we all swim or we all sink together. I know Mitt Romney is the worst possible person to lead right now. I believe Barack Obama is the leader we need. But he needs help. He has carried the anchor of an obstructionist congress around, with a party that has twisted rules to stop any progress. They need to be put on the shelf of history for good so America can face its problems with an eye to the future.

retired in West Liberty
View all posts by Dave Bradley →
This entry was posted in 2012 Election Campaign and tagged grandson, Romney. Bookmark the permalink.

1 Response to Looking Out About 65 years