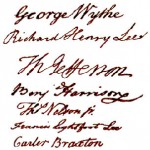 Newt Gingrich laid out the case for Republicans at an event in Muscatine last night and I am tired of the narrative. It is reflected in his statement, quoted in the Muscatine Journal, “virtually everybody in this room believes that you’re responsible for your life.” This really gets to me.

I have met some Roosevelt Democrats and some Roosevelt haters in my life. Gingrich traces our current trouble back to FDR. From the Muscatine Journal, “Gingrich cited 1932 – the year Americans elected Franklin D. Roosevelt to the first of four terms in the White House – as the year ‘we added a layer of bureaucratic socialism’ to the fabric of individual rights spelled out by the Founders in the Declaration of Independence and the U.S. Constitution.”

Republicans did not like FDR and his programs then, and they have been chipping away at them ever since. I first noticed this chipping away in the outsourcing of jobs to countries where the labor was cheaper. When I graduated from the University of Iowa in 1974, without a trade, one of my criteria for a job was to find work where the company could not be off-shored. That meant avoiding the manufacturing concerns of my home town, which offered good paying jobs with health insurance, a retirement plan and other perquisites. I did not believe those jobs were sustainable in 1974, and history has borne out my view. Bendix moved to France, many of them are gone, and where the Case plant stood, there is now a casino. That was only the beginning.

Having turned down a foreman’s job with Oscar Mayer in Davenport, and not having a career plan after college, when the Vietnam War ended, I enlisted in the United States Army. If there were no suitable jobs, then giving back to my country was important, and something to be done while still young.

I had no idea what being in the military would be like. I did know we could do better than the leadership of people like Lieutenant William Calley who was responsible for the murder of hundreds of unarmed villagers, including women and children, in My Lai, Vietnam. Calley was under house arrest at Fort Benning, Georgia when I arrived there for Officer Candidate School.

Being a soldier teaches the value of teamwork and leadership, but it also teaches the persnickety peccadilloes of career soldiers and officers. The military was not the career for me, and shouldn’t have been as I considered myself a citizen soldier and was ready to return to civilian life after my tour of duty. My honorable discharge can’t be belittled or taken away from me and I gave more than I got from military service. Military service is evidence of taking responsibility for our life and not making a career of it when offered, evidence of personal independence.

When I entered the job market after the military, there were few employment positions that held my interest. I decided to attend graduate school, using the GI Bill and some of my savings. I did this partly to vindicate my sketchy undergraduate record, but partly to get to know people with a perspective of having completed military service. I whizzed through in 17 months with a 4.0 grade average. I would not become a teacher or professional academic, and this led me to the want ads.

In Muscatine, Gingrich talked about jobs, “How to create enough jobs to get the economy moving, which he said he would do by cutting taxes and business regulations, creating a new energy plan and ‘praising the people who create jobs.'” When a person views jobs through the window of help wanted ads, as I did after graduate school, things weren’t so rosy. Not much has changed since then.

What has changed is the era of jobs and continuous economic growth seems at an end. The Republican talking point of “creating enough jobs” seems hollow. Doing so by reducing taxes and business regulations seems inept. In praising the people who create jobs, I don’t foresee any praise for those of us who have been out there keeping busy making our own way by doing work without wages to supplement our income and get by.

Gingrich, like the other Republicans, still believes that what goes on in Washington matters. What those of us who are taking responsibility for our lives know is that Washington is an increasingly irrelevant cacophony that benefits people with the power and influence to control what goes on there.

“There’s a conscious effort by the Left to not teach American history,” Gingrich said in Muscatine. “Our Founding Fathers really were different than the current system.” What people like Gingrich fail to understand is that some of us are a living link to the founding fathers and our oral history trumps what he calls history. We are a people whose ancestors have been indentured to get started in the new world in 17th century. Our ancestors were for and against King George, yet fighting at Yorktown to win independence from Britain. Our ancestors fought on both sides of the Civil War. Our ancestors mined coal and opened private businesses to compete with the company stores in the coal camps. Our ancestors fought in the first World War and were jailed for draft dodging during the second. Our ancestors were Whigs and Tories, Socialists and Democrats, Republicans and Free Soilers and of every political party through the history of our country. People on the left want this history told as well and are telling it. So nuts to Gingrich when he talks about his history.

My intention was to point out that Republicans have been chipping away at the middle class since the early 20th century and have not stopped. What they forget is there is another story, one in which a government that is bloated and inefficient has managed to do some good. Fixing government is possible, ending it is not. That there are people who have made it on our own despite a society that seems a Darwinian struggle for existence is noteworthy and not noticed enough. When we are in the middle class, we have no choice but to make it on our own.

There are people who have a history to tell, and that history is one of sharing as well as taking from society. But I am at wit’s end with the Republican narrative and don’t know what else to say, but “just stop it.”

~ Paul Deaton is a native Iowan who lives in rural Johnson County, Iowa.

1 Response to Just Stop It