One of the unique aspects of midwestern life is the county fair. Stretching back to when some states were still territories the county fair has been one of those icons of American life that many harken back to as “the good old days.”

Actually fairs go back to Europe of the 18th century. The county fairs seemed to reach a peak in the 1950s to 1970s. A time when many folks of an area had the means and some money to go to the fair and before the big box stores and then the internet stole their attention away.

Most began as agricultural exhibitions and contests that culminated in a state fair near the end of the summer. Over the years midways with carnival games and rides were added and in many cases live entertainment was added in. As noted the internet and other entertainment venues have eroded the crowds at the county level.

One of the biggest victims of the corona virus last year were the county fairs. So they have some ground to make up this year. Plus as always, this is the place to go to see friends and acquaintances we haven’t seen for a while. If you have time and a few bucks and are vaccinated, why not check out your local county fair.

A) While German Chancellor Angela Merkel is visiting the US, what natural disasters are her country enduring?

B) What Des Moines small business owner and activist announced she will make a run for Governor of Iowa?

C) July 19 & 20, 1848 – what group of then disenfranchised Americans met in Seneca Falls, New York to outline plans to get the vote among other priorities?

D) In a revelation in a new book, what Chair of the Joint Chiefs of Staff was so concerned that Trump might have attempted a coup that he and fellow military heads made plans to stop it?

F) In what may be a real turning point in climate change, parts of what “lungs of the planet” are now emitting more carbon dioxide than is removing?

G) Perhaps the country’s most famous state fair, what fair was the inspiration for the novel “State Fair” and the subsequent movie and musical?

H) Another shocking revelation that confirmed rumors this week was that there was evidence that what world leader was personally involved in helping Trump win the 2016 election?

I) Senator Lyndsey Graham said he would “go to war” for the principals that what fast food company stands for?

J) By attendance the Texas state fair is the largest. What much shorter midwestern fair ranks 2nd in attendance?

K) Lack of food and medicine were given as reasons for the unusual and very large protests that rocked what Caribbean island nation Sunday?

L) “Horrifying” was Dr. Anthony Fauci’s reaction to the audience cheering for lagging vaccination rates at what conservative get together last weekend?

N) On July 15th what set of Americans started receiving up to $300/month/child as new child tax credits started?

O) What special edition ice cream flavor was created by Brooklyn-based Van Leeuwen’s Ice Cream that received publicity around the country because of its unusual flavor?

P) In Iowa, what county has declared itself a “second amendment sanctuary county”?

Q) Speaking on voting rights in Philadelphia Tuesday, President Biden said America is facing its most significant test to our democracy since what period in history?

R) Democratic legislators from which state left that state and flew to DC to stop that state from enacting voter suppression laws?

S) Jair Bolsonaro, president of Brazil was hospitalized after a chronic problem with what?

T) This is the first weekend for what annual month long celestial light show known as what?

GOP: Life begins at conception and ends at infection. – OhNoSheTwitnt 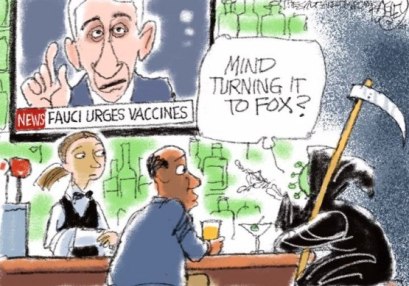 C) this was the Seneca Falls Women’s Convention

The only thing we have to fear is fear itself. And stupid. We should be scared sh*tless of stupid. – Middle Age Riot

retired in West Liberty
View all posts by Dave Bradley →
This entry was posted in Humor. Bookmark the permalink.