Reynolds Just Doesn’t Know How To Manage A Crisis 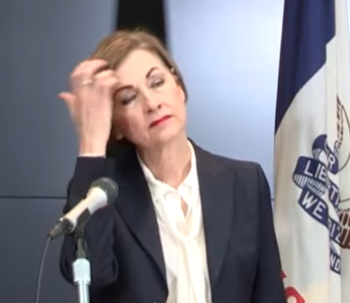 Thursday night Kim Reynolds made a big splash by going on Fox News cable show and declaring that she, as Iowa’s governor, had sent money earmarked for corona virus testing in Iowa’s schools back to the federal government because as she said Iowa’s schools were already open and therefore no testing was needed.

I got an email from a friend Friday morning with this story and an attached video from KCCI. The video made Reynolds look like a hero, standing up to big, bloated federal government and saving the taxpayer at least a few bucks. A crowd at the town hall where she was appearing cheered her on.

Reynolds reasoning was summed up in this statement:

“I think that (Biden) thinks that COVID-19 just started,” Reynolds said during the Fox News town hall. “I just returned $95 million because they sent an additional $95 million to the state of Iowa to get our kids back in the classroom (and) doing surveillance testing, and I said, ‘We’ve been in the classroom since August. Here’s your $95 million back.’”

My first thought was that this makes no sense. Why would there have been an appropriation for an unneeded process in a recently passed piece of legislation? Surely there are occasional errors in legislation but not usually like that. Talk about not passing the smell test. Reynolds version set off a special stink.

So I checked various Iowa news sources and not to surprisingly all had some variation of the story that KCCI. Main stream media sources obviously take some feed and do a slight mount of massaging to make the story their own as it were. None answered my question.

So I sought out one source who I hoped would dig in deeper. That would be Laura Belin over at bleedingheartland.com. She did not disappoint. As I had hoped, Laura had dug deeply into the story. As she reported:

To my knowledge, no Iowa school districts are routinely conducting surveillance testing of students attending classes in person. Rather, children are tested primarily when they are showing symptoms suggestive of COVID-19, if parents or guardians seek out that testing.

Surveillance testing can identify asymptomatic positives in the student body before those children spread the virus to classmates, their families, and school staff.

Democratic State Senator Rob Hogg, who has been tracking COVID-19 statistics daily, tweeted on April 29 that Iowa has reported more than 8,400 COVID-19 cases among children since January 29, when Reynolds signed a bill requiring school districts to offer 100 percent in-person instruction, without requiring masks or social distancing in schools. The state reported another 110 cases in children on April 29.

The money was authorized to create a preventative method to stop outbreaks before they ignite into full fledged disasters. This is textbook epidemic control and for that matter a common crisis control technique.

By refusing this money Reynolds once again opened Iowa up to the possibility of turning a small fire into a conflagration! I say once again because during this crisis Reynolds decisions have frequently done little to contain the spread of the virus and have always aggravated it. She has been the virus’s best friend.

From keeping meat packing plants open, to mishandling the early crisis in the care centers, to reopening bars and restaurants was too early, to reopening schools before they should have been, to the refusal to mandate masks, and mishandling of vaccine distribution the Reynolds administration has consistently made the wrong decision for the good of Iowans.

I will end with another excerpt from Belin’s report, a comment from epidemiologist Dr. Eli Perencevich:

UPDATE: Dr. Eli Perencevich, an epidemiologist and infectious disease specialist at the University of Iowa, provided this comment to Bleeding Heartland on April 30.

“For the governor it’s always appeared that the science book on COVID-19 was closed in spring 2020. Iowa didn’t learn and the state didn’t adapt since that time. There’s no better example than the state forcing 100% in person K-12 classes right as the science was solidifying around the fact that children, particularly older children, catch COVID and spread it equally to adults. In addition we know that the newer variants like B117 spread more easily and may be more deadly.

Therefore it’s very disappointing to see that the Governor has been sitting on $95 million dollars that could’ve been used to make our K-12 schools and school athletic activities more safe. Colleges across the country have been using frequent weekly or biweekly testing of students to detect and stop outbreaks.”

I wish to thank Laura Belin for doing the job that other news sources refused to do.