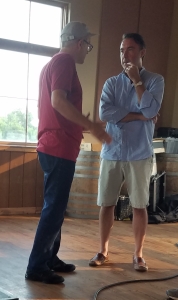 In an effort to get outside my comfort zone I tried something new. I went to a media event called “Pints and Politics” at the Cedar Ridge Winery and Distillery in Swisher Thursday after my shift at the home, farm and auto supply store.

The Cedar Rapids Gazette hosts Pints and Politics in which their columnists and reporters form a panel and answer audience questions. People drink alcoholic beverages and talk about politics. That is, most people. I drank about two pints of water before the show started and discussed a case with a lawyer I know who was there. I felt uncomfortable among the crowd of people mostly in my cohort of sixty somethings. Many seemed like they had retired with not enough to do. One presumes they read newspapers and listen to the radio. More than 200 people arrived for the forum.

Iowa Public Radio glommed on to Pints and Politics and makes an edition from the raw materials for their weekday program River to River with Ben Keiffer. Keiffer drank a beer and handed out a few Post-It pads with the Iowa Public Radio logo on them. These will be handy for dispatches to my spouse to be left on the refrigerator with information about our ongoing conflict with the spiders assuming control of our house. The Gazette, being a newspaper under duress in an on line world, had no such useful perquisites.

I attended the event Thursday and listened to the edited version on the radio Friday.

The panelists were Todd Dorman and Adam Sullivan, both columnists for the Gazette, and Joyce Russell, statehouse reporter for Iowa Public Radio. The two people I know best, Lynda Waddington and James Q. Lynch of the Gazette, while in adverts for the event, were both absent. I follow the work of the panelists. While Russell is a journalist, I’m not sure what one calls columnists. The word “pundit” was used several times during the event and the appellation will serve.

The event was rigged from the git-go to serve existing media narratives. Audience members submitted written questions to the panel and many more than could be asked were collected. This made the question editing process the driver in how the panel proceeded. The topics Keiffer chose were what’s already in the news: the Iowa Supreme Court hearing oral arguments on the state’s voter suppression law that day; President Trump’s recent visit to Peosta; and others. The radio version should be posted soon here. 2020 presidential candidate John Delaney announced completion of visits to all 99 Iowa Counties. Dorman suggested as a reward that his likeness be carved in butter and displayed at the Iowa State Fair.

I’m not sure what I expected and maybe that’s the point of trying something new. I did not know many attendees, and most of those I did were conservatives. Democratic Rep. Amy Nielsen was there. Cedar Ridge Winery and Distillery is in her district. Republican congressional candidate Dr. Christopher Peters was present working the crowd. Once Peters found out Rep. Rod Blum declined an opportunity to appear on River to River he made clear to Keiffer he had no reservations about appearing on the program. There was a table full of Libertarians, about proportional in number to the percentage of the general population. The rest of the audience leaned Democratic.

Adam Sullivan stood out on the panel simply because he talked so much. He served as a useful foil for more Democratic audience members to express their belief in status quo politics driven by media narratives. Russell is a professional, as are they all. The three of them all tried to get along. In the background I might have heard a “both sides” or two, but maybe that is confirmation bias whispering in my ear.

The most significant media narrative related to how elections are decided. I posted this on twitter Friday while listening to the radio.

Panelists agreed with Dorman we are in an election where issues not that important. “Persuasion stuff is kind of dead,” he said. Rile up the base on both sides. Get who you can of whoever is left. I’m not sure that’s the case, although here’s an example of media that believe it.

I want to emphasize 1. I’ve heard this before during recent election cycles, and 2. based on my experience this cycle, I don’t believe for one minute this is how the 2018 midterms are rolling out. Repeating this narrative is not as important as the fact people believe it. Based on reports I get from the field, the narrative is bankrupt and the panelists didn’t seem to be aware. That disconnect is important.

While attendees passed a pleasant two hours, I was decidedly unsettled by the experience. As I drove east along 120th Street in my 21 year old vehicle, the sun was moving toward the horizon. I turned north at the Ely Blacktop to get an ice cream at Dan and Debbie’s Creamery before heading south and home. What unsettled me was not the media personalities, or the people in Swisher. It was knowledge of the amount of work to overcome the tainted media narratives which were promulgated.

I get it that news writers need a hook and consumers of news need to understand it. A lot of fish were caught during Pints and Politics but the pool wasn’t very deep. I’m thankful for a new experience, but I doubt I’ll be returning to a media event like this.

~ First posted at On Our Own: Sustaining a Life in a Turbulent World