Obama And Trump On Immigration 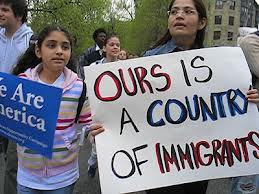 The history of immigration to the United States reveals a long and continuing pattern of fractious immigration debate, laced with myths, xenophobia, racism, sexism, and classism.  Over the years, American Indians, women, Catholics, workers, and leftists among others faced prejudice.

During the past decade, the Obama and Trump administrations pursued somewhat different immigration policies.  Obama focused on the people while Trump emphasized the border.

But Obama did lead a successful effort in the summer of 2014 to pass the DREAM Act, a temporary measure opening a path to citizenship for unauthorized immigrants who arrived as minors.  Fearful of hurting Democrats running for reelection in the fall 2014 elections, Obama waited until after the elections to renew his appeal for immigration reform, which Republicans once again blocked.

From the opening days of his presidency, Trump made frenetic moves with immigration quickly emerging as a defining issue.  He tried to curtail undocumented migration by larger border patrols, more effective fences, and wider deportations.  Directing travel bans at Muslims, restricting admissions of refugees, building a U.S.-Mexican border wall, and ending the DREAM program were other administration initiatives.

The Trump administration’s “zero-tolerance” policy criminally prosecuted anyone caught crossing the border “illegally.”   Opposition to the policy came immediately, and it escalated when family separation occurred.  Over 2,500 children were separated from their parents at the border over a period of several months.  Trump insisted the separation was legal and a needed deterrent to illegal entrance.

Protest from the public, Democrats, and even a few Republicans created a firestorm of opposition.  Soon a court order forced Trump to issue an executive order to keep immigrant families together.  While reunification proceeded, many of the detention centers holding families reportedly are overcrowded, unsanitary, and understaffed with the whereabouts of some immigrants still unknown.

The Trump administration’s immigration policies draw opposition across the country and abroad as well.  Critics confront Trump in words and actions.  Examples include opinion pieces and letters to the editor, street demonstrations, lawsuits, rallies, vigils, and other forms of protest.

Convinced of the utter correctness of all his policies, Trump self-righteously dismisses criticism of his immigration policies (and all his other policies for that matter) as coming from unpatriotic congressional Democrats, sore loser Hillary Clinton, and dangerously inept Barack Obama.

Trump opponents charge the administration with fostering hate and fear, betraying the American tradition of welcoming newcomers from all parts of the world.  Led by the ACLU, a number of immigrant rights organizations filed lawsuits against the Trump immigration executive orders aimed at punishing undocumented individuals.

On July 29, Trump tweeted that he would consider shutting down the government if Democrats refuse to vote for his immigration proposals, including a U.S.-Mexican border wall.  The president’s statements on immigration reveal class and racial/ethnic discrimination.  He wants fewer dark skinned folk who are poor or working class immigrants, and more white northern Europeans who are middle class, professional or rich immigrants.

But the very essence of America is our class and ethnic/racial diversity.  Immigrants continue to play a vital role in the economy and culture of our republic.  As workers, taxpayers, consumers, and entrepreneurs, immigrants, including the undocumented, are vital to the nation’s economy.  They deserve decent pay, safe, humane work environments, civil rights, and a path to citizenship.

Like Loading...
This entry was posted in Immigration and tagged DREAM Act, Immigration, immigration reform. Bookmark the permalink.

1 Response to Obama And Trump On Immigration