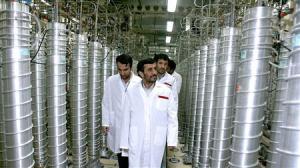 He campaigned against it. He begrudgingly certified Iran’s compliance with it after his inauguration. As additional 90-day certification periods passed, he didn’t. Neither did he move to end it.

With the installation of John Bolton at the National Security Council, and Michael Pompeo as Secretary of State, administration policy regarding Iran is expected to change.

The Iran Deal or Joint Comprehensive Plan of Action Regarding the Islamic Republic of Iran’s Nuclear Program (JCPOA) was the signature foreign policy achievement of President Barack Obama. The United States, along with the United Kingdom, Russia, France, Germany and China, stopped Iran from building a nuclear weapon.

In July 2015, Iran had almost 20,000 centrifuges used to enrich uranium in the cities of Natanz and Fordo, according to BBC News. Iran had been building a heavy-water nuclear facility near the city of Arak. Spent fuel from a heavy-water reactor contains plutonium suitable for a nuclear weapon. Iran agreed to restrict these activities in the JCPOA which brought a robust regimen of monitoring, verification and inspection designed to ensure Iran’s compliance with the deal. Every 90-day certification period, which is peculiar to the United States, international inspectors reported Iran maintains its compliance.

We should keep the Iran Deal. It’s not just me who says so.

“120 of America’s most respected national security leaders want to keep the Iran Deal,” wrote Joe Cirincione, president of the Ploughshares Fund. “Trump, Pompeo and Bolton want to kill it.”

Click on the link to read Keep the Iran Deal — 10 Good Reasons Why authored by the National Coalition To Prevent An Iranian Nuclear Weapon.