Schedule Of Public Meetings On Proposed Oil Pipeline In Iowa 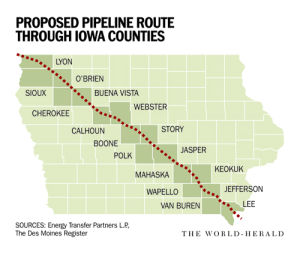 Energy Transfer Partners (ETF), also doing business as Dakota Access, announced plans for a proposed oil pipeline that will run diagonally across Iowa, through 17 or 18 counties. It will carry light sweet crude oil from the Bakken oil fields in North Dakota to Illinois where it will link with another pipeline that will transport the oil to terminals along the Gulf of Mexico. The company also announced that some of the crude oil will be loaded onto rail cars for shipment to the east coast.

The company has scheduled public informational meetings in December 2014 in each of the counties that the pipeline will cross, a requirement before asking the Iowa Utilities Board for permits. Members of the public will be able to attend and can speak during the meeting. ETF is expected to seek permits in 2015 through 2016. The company plans to have the pipeline operational in the fourth quarter of 2016.

The Sierra Club Iowa Chapter urges you to join in opposition to the pipeline proposed by Energy Transfer Partners by attending and speaking out at one of the public meetings. The meetings will be held as follows:

Consider additional ways you can oppose the pipeline proposed by Energy Transfer Partners. The Chapter encourages you to:

The Iowa Sierra Club is concerned about the impacts a tragic accident or a leaky pipeline involving the highly flammable oil will have on Iowa’s communities, farms and environment, including

Although the company plans to seek voluntary easements, it may ask the Iowa Utilities Board for permission to acquire the easement through eminent domain. The pipeline will require a permanent easement 50 feet wide, with no structures allowed on the easement. An even wider, temporary easement of 100 feet to 150 feet will be taken during construction.

Once the oil in this pipeline finally reaches the oil terminals in Nederland, Texas, there is absolutely no guarantee that the oil and refined products from the oil will remain in the United States for use in this country.

In March 2013, homeowners in Mayflower, Arkansas, were overwhelmed when oil from a leaky pipeline flowed into their basements, over their lawns and onto their streets.

The Bakken oil is the same oil that was involved in train wrecks in North Dakota in December 2013 and in Lac-Mégantic, Quebec, Canada, in July 2013.

A new pipeline will delay the U.S. transition to clean and renewable energy and more fuel-efficient vehicles. The United States needs to move away from fossil fuel extractions and to energy sources that have less impact on climate change.