TPP – Not A Good Deal 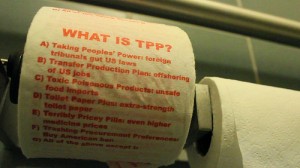 A few weeks back I received an email that reported that a group of Iowa legislators were looking for some guidance on what was in the TPP (Trans-Pacific Partnership). The reason is very logical – if the US joins in the TPP, then Iowa may need to change some laws or policies to be in compliance or to take advantage of the new rules or to make sure that we do not lose some of our protections such as environmental protections.

Thus once again the biggest single problem with the TPP was highlighted. It is an American trade agreement that is being negotiated in secret. Few details of the TPP have been reported on. But rumors are rampant. The rumors sound for the most part that our middle class and poor class will once again be victims of “trade” much as they were in the NAFTA agreement.

Negotiations for the TPP have been going on since 2008. During that time little information has leaked out. Last fall and early this winter Wikileaks released some documents they had obtained of portions of the proposed agreement.

To top it all off not only do we know little of what is in the TPP, the administration is pushing hard for senate to approve this treaty on a fast track vote. Putting all this together a citizen’s first question should be “What are they hiding?” Considering the shellacking that many of our citizens took from NAFTA and considering the secrecy surrounding the whole negotiations, suspicions should be expected.

Tuesday, trade Ambassador Michael Froman gave a speech before the Center for American Progress. This speech was supposed to be off the record. But what came out of his speech became a much discussed presentation the next day. A good summary of the speech and response can be found here. The speech itself can be heard here:

One can safely say he won few friends that night. Once burned, twice shy.

NAFTA burned workers in the US badly. Ross Perot nailed it back then when he said that “the giant whooshing sound you hear will be jobs leaving the US.” The United States can’t sustain another blow like that. We need the Senate to stand up and give this agreement a thorough review with the American people in mind, not just the business community. We also need the ability to maintain our total sovereignty, not lose it to special courts as has happened with NAFTA.

In short, negotiations taking place behind closed doors and then rushed through congress stinks. We are supposed to be an open society which means negotiations in public. It means approval after an extensive review. It means taking input following approval if it happens.

While some folks have heard of TPP, almost no one has heard of it’s brother the Trans Trade and Investment Partnership. This is being negotiated with Canada and Europe. This really scares me. This is the treaty that will hand our sovereignty to corporations. The reason that you have never heard of the TTIP is that it is being negotiated in the deep dark.

One progressive commented on the Froman speech selling the TPP thusly:

An additional meeting participant, who like the others requested anonymity, wrote in to provide more color.

“You missed my favorite Froman quote that night when he told us that based on our logic that we should all go home and just throw away our computers and get rid of automation,” he said. ‘To say that he did profound damage would be an understatement when you now have progressive groups that weren’t tracking this or engaged now asking what they can do to fight it – all because of his demeanor and performance.”

retired in West Liberty
View all posts by Dave Bradley →
This entry was posted in Trans-Pacific Partnership (TPP) and tagged middle class, NAFTA, TTIP. Bookmark the permalink.
%d bloggers like this: