A Bipartisan Strategy to Reverse the Changing Climate 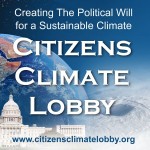 Barbara Schlachter is a founding member of 100 Grannies for a Livable Future, Iowa City Climate Advocates and Citizens Climate Lobby. The following guest opinion appeared in the Nov. 14, 2013 edition of the Iowa City Press Citizen. It is re-printed here with the author’s permission.

November is Remembrance month: All Saints and All Souls and the Day of the Dead, then Veterans Day, known as Remembrance Day in Britain.

Now we are looking forward to Thanksgiving, which is a time of great feasting with many families traveling many miles to do this together and to remember the importance of being family. It seems as though it also ought to be a day of remembering farm families who labor to provide the food for this feasting as well as remembering the earth itself and her blessed bounty.

Harvest time used to be a great occasion for rejoicing because it wasn’t always a sure thing. Many things can go wrong with a year’s crops. Most of us are too far removed, even in Iowa, to appreciate how utterly miraculous and vulnerable our food supply is. But this year we have had some hard reminders: flood and then drought and a report from Iowa scientists that climate change is a rising threat to Iowa agriculture.

Estimates are that we will lose the ability to produce food by 2 percent a decade even as we know that world population still is on the increase.

The Iowa Farm and Rural Life Poll released earlier in November reported that fully 75 percent of farmers think climate change is occurring, up from 69 percent in 2011. Yet only 16 percent think human activity is the reason for this. Perhaps the poll was taken before the release of the International Panel on Climate Change’s conclusions that scientists around the world are 95 percent sure that human activity is responsible.

If you believe that climate change is real, but human activity doesn’t cause it, then you will most likely concentrate your efforts on adaptation. There has been a lot of talk lately about our need to prepare for the dire conditions that are coming, which to my mind takes us away from the most important prior question: what are we going to do to reverse them.

This is different from denying that it is happening, and perhaps we should at least be thankful for that. But they go on to suggest that reducing carbon emissions won’t matter because it isn’t caused by human activity. So they have introduced legislation in a dozen states to repeal renewable electricity standards passed by those states. Fortunately, no state that has passed an RES has ever repealed one.

Iowa leads the nation in wind energy, with nearly 30 percent of our energy coming from those beautiful wind turbines you see when you drive west on Interstate 80. This non-emitting form of energy will make a difference in climate change.

This is mitigation, not adaptation. Both will be necessary, but the most important thing in the long run is to do everything we can to slow and eventually cease our fossil fuel activity.

For this reason I support a fee and dividend program that would tax carbon at its point of origin and return the tax money to the American people. This would create a market-based solution to energy. As the true cost of fossil fuels becomes operative, wind and solar and geothermal would benefit from a more level playing field.

It is a bipartisan strategy that keeps us from putting all our resources into adaptation to what we can never finally ever adapt to, not only because of the trillions of dollars required but also because the earth’s systems that support our food could not finally endure.

Fossil fuel intensive farming might seem to be one of our biggest obstacles in the effort to reduce greenhouse gases. But a report from the UN Environment Program released on Nov. 12 says that there are many ways agriculture can cut its emissions drastically and contribute to environmental sustainability and higher yields.

This is a hopeful direction for all of us.