Well, once a year America takes its hat off to Labor. The rest of the year they are pretty much ignored except to bitch about them. This year Labor in general has received some raises due to shortages of labor as a commodity. This has sort of backfired in that as inflation took hold, Labor was blame, most think undeservedly.

Yet the Federal Reserve is on a mission to raise interest rates that will slow borrowing that will slow expansion that will reduce the need for Labor, because raises to labor is what has cause inflation. That is their faulty thinking. Could to possibly be shortages due to the Russian war on Ukraine or corporations raising prices to score massive profits, could it?

Still, at this point things are looking pretty good for those looking for work, plus wages continue to rise. Union activity is up, though still not strong. Unions have a 71% approval right now. Maybe people are finally remembering that it is labor that really does the building.

Another week of right wing radicalism.

A) In a speech Thursday night in Philadelphia, President Biden warned that what threatens the very foundation of democracy?

B) Among the folders recovered during the FBI raid on Mar-a-Lago were several folders that were what?

C) History of Labor: What man started the Cigar maker’s Union, and eventually founded the American federation of Labor (AFL)?

D) A new documentary released last week examines the life of what Iowa hero from the 1930s and 1940s?

E) On top of extreme flooding rains, what state capital has the additional problem of a water plant that quit working?

F) Who is famous for organizing farm workers in California during the 1960s?

G) As yet another stalling tactic, the legal team for FPOTUS is calling for a what to sort documents stolen by FPOTUS?

H) North to Alaska! Who won the election to replace the late Don Young as Alaska’s representative in Congress?

I) Almost as note worthy what former national candidate lost in the Alaskan election?

K) Speaking of Labor, the monthly jobs report was released Friday. How many new jobs were created last month?

L) Once again, Ginni Thomas, wife of Justice Clarence Thomas, was found to have tried to change election results in what second state?

M) A Dutch soldier, in the US for training exercises was shot to death in what US city last week?

N) Inspectors from The UN visited what kind of generating plant in Ukraine last week to assess any damage?

O) What former Speaker of the House is in the sights of the January 6th Committee for information about the attempted coup?

P) In what year was the largest percentage of the labor force represented by labor unions?

Q) Which sitting US Senator predicted (threatened?) that prosecuting Trump would lead to “riots in the streets”?

R) What last premier of the USSR died last week in Moscow at age 91?

S) The National Labor Relations Board (NLRB) rebuffed an attempt by what company to nullify an earlier successful union vote?

T) Serena Williams lost her match Friday in what may be her last US Open tournament. She has been called a GOAT in tennis. What does GOAT mean?

Harry Truman’s famous line fits perfectly for Pres Biden’s speech on MAGA: “I never did give them hell. I just told the truth, and they thought it was hell.”  Dean Obeidallah

G) Special Master (and we bought Putin was his special master)

L) Wisconsin (she has been found to try in Arizona earlier

T) Greatest Of All Time 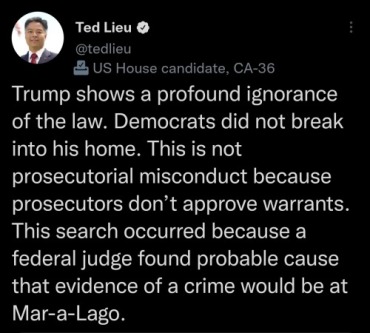