Right Wing Crazy Is Nothing New In America 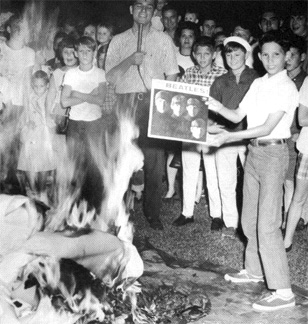 On Thom’s program this week he reminds us that right wing crazy is not new in America. Yes I am old enough to remember this style of crazy in the photograph, burning Beatles records because John Lennon made a comment that the Beatles were more popular than Jesus.  Not that it is by any means the worst example of right wing nuttiness but it may be the funniest.

“..And if Trump and his boys could bring it back if they get power again they’ll try to bring back probably half of those things.

“But this is not new.

“Instead of public whippings to humiliate their enemies they use social media, truck caravans with semi automatic weapons and giant flags. They pick fights in airports and public parks. Instead of denying that the earth goes around the sun, now they’re denying the dangers of Covid and global warming.  Instead of closing schools, they force teachers to expose themselves to disease and harass and threaten them if they dare teach actual science and the actual racial history of the United States. Instead of requiring the payment of church taxes to vote as they did back in the day they now have these elaborate ways that you have to prove your citizenship and they regularly purge what they refer to as undesirable people from voting rolls with no consequence at all, the supreme court giving a wink and a nod. No problem.

“From Ben Franklin’s time until today every generation of Americans have confronted right wing authoritarians who were bent on maintaining violent white male supremacy using the twin levers of religious fanaticism and concentrated wealth.