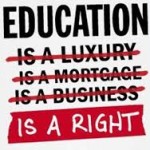 Public education has always been a controversial matter. At the same time, it has been labeled as the hallmark of the nation’s democratic ethos and as a panacea for a host of social ills.

In 1965 President Lyndon Johnson signed the Higher Education Act. It aimed to help poor, working class and low-income students attend college for post-secondary degrees, training and certification. Increased federal money went to college students as scholarships and low interest loans. But Republicans have often refused to spend the money needed to fund these programs, hurting most black and brown skinned people along with those classified in the non-traditional age group.

More bad news for public education came during the Trump presidency when he and his Education Secretary, Betsy DeVos, started an unprecedented assault on the nation’s public schools by seeking to privatize them. A coalition of students and parents, community activists and unions organized to demand funding and protection for public schools. The recent election of President Joe Biden came in no small part as a result of the public outcry against the Trump-DeVos policies and the movement to preserve and defend public education.

Public schools also face challenges from so-called reformers. An example here would be the wealthy donors who believe they are entitled to act as decision-makers on certain policies. Our schools should not be commercial playgrounds for wealthy non-educators. Rather than looking at schools as business ventures, we need public policies that bolster schools as intellectually vibrant places that encourage inquiry-based learning, that respect educators, that welcome parents, and that treat students with dignity.

Research shows that the benefits of free tuition at community colleges would outweigh the cost. Half of the states in the union already have some form of free college tuition.

The Republican Party didn’t adopt a platform for the 2020 elections, deferring to President Trump’s policies, which among other things, stand in opposition to tuition-free colleges and universities. Congressional Republicans also have not supported free college tuition in the past. However, it should be noted that the very first state free college tuition program was initiated in 2015 by former Tennessee Gov. Bill Haslam, a Republican. Subsequently, such deep red states with Republican majorities in their state legislature such as West Virginia, Kentucky and Arkansas have adopted similar programs.

Free college tuition programs help mitigate inequities by increasing college enrollment, lowering dependence on student loan debt and improving completion rates, especially among students of color and lower-income students who are often the first in their family to attend college.

Wage inequality measured by education is getting worse. In May of 2020, the unemployment rate among workers without a high school diploma was nearly triple that of those with a bachelor’s degree. Today the fastest growing sectors of the economy are health care, computers and information technology, all requiring a college credential of some form such as an industry-recognized skills certificate or an associate or bachelor’s degree.

Public schools provide most of the academic skills needed in American workplaces. They continue to function as the mainstay of the society.