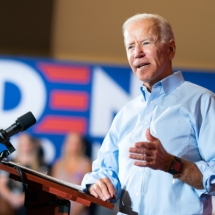 The November 3rd U.S. election marks one of the most important in the nation’s history. Issues like the coronavirus, firearms violence, people struggling to meet living expenses, racial/ethnic inequality, environmental concerns, and a Supreme Court vacancy swirl around the various media platforms that voters confront daily.

With President Donald Trump as chief executive, the nation careens from crisis to crisis, leaving a trail of chaotic and incompetent actions and untruthful pronouncements. He bungled his response to the pandemic, even personally rejecting the advice of his own health advisors. Trump always puts himself first, cares little about statecraft, mocks opponents, and courts the flattery of dictators.

Democrat Joe Biden stands as the polar opposite of Trump. Biden, the Democrats’ consensus pick for president, has a long record of public service in the U.S. Senate
Biden regards the pandemic as an existential threat. He agrees with Fauci and other top infectious disease physicians that coping with Covid-19 requires mask-wearing, social distancing, and avoiding large crowds. Biden wants free virus testing for everybody.

Other parts of the Biden agenda include a variety of initiatives. Here is a sampling that ranges from climate to education.

On climate, Biden accepts the reality of climate change as affirmed by an overwhelming number of scientists. He has proposed a plan to invest in clean-green energy. He wants to end carbon emissions from U.S. power plants by 2035. He would rejoin the Paris Climate Accord.

On the economy, Biden supports raising the minimum wage to $15 an hour. He would make substantial investments in good paying and often union jobs on infrastructure projects. He also supports using wherever possible U.S.-made materials, services, research and technology.

On immigration, Biden would reverse Trump policies that separate children from their parents at the U.S.-Mexican border. He would end travel bans on those from several majority Muslim countries. And he would protect Dreamers from being deported and offering them a path to citizenship.

On criminal justice, he has proposed policies to reduce incarceration, address race, gender and income-based disparities, and help released prisoners to transition to civil society and find jobs.

On education, Biden has endorsed plans of Bernie Sanders and Elizabeth Warren. These include student loan debt forgiveness, expansion of tuition-free colleges, and universal preschool access.

Kamala Harris, Biden’s vice president selection, represents the rising number of people of color in the United States. She is the first black woman and the first Indian-American woman to be on a major party’s national ticket. “There is no vaccine for racism. We have to do the work,” she says.

Joe Biden would bring a steady, seasoned hand to the presidency in a dangerous and uncertain world. Biden knows how to heal, unify, and lead. He projects openness and respect. He sets aside self-interest, and cares for all American residents.

It’s time to heal and work to unite the country. It’s time to stem the spread of the coronavirus, rebuild the economy, honestly confront racial and economic inequality, boldly address climate change and reestablish the nation as a respected world leader.

To reach these goals, we need a president who will put the country ahead of personal and political self-interests. Joe Biden believes in legitimate science, cares about people of all economic and racial/ethnic backgrounds, and reaches across the political aisle to those who disagree with him.

Democrat Joe Biden, a hard-working, caring, knowledgeable, and empathetic leader, projects openness and respect. At this critical juncture in our history, the nation needs a leader with Biden’s credentials.

Like Loading...
This entry was posted in Blog for Iowa and tagged #trumpresistance, Joe Biden 2020, Joe Biden President. Bookmark the permalink.