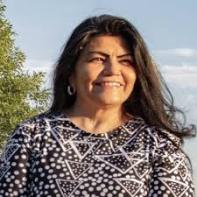 I am running for the Iowa House, District 11- which includes Buena Vista and Sac Counties.

In 2003 I was the first Latina elected to a city council in Iowa, serving three consecutive terms on the Storm Lake City Council.

My service and record extend across Iowa. I was appointed by former Governor Tom Vilsack as a commissioner for Iowa’s Latino Affairs Commission under the Department of Human Rights. I also sat on the Iowa Empowerment Board and was a member of the Iowa State University Extension Board. In addition to my service in the community, I worked as a counselor for a domestic violence and sexual assault agency for fourteen years, and currently I work for a law firm in Storm Lake.

I am a strong advocate for women in politics. I believe that the participation of women in public office is essential to building and sustaining strong, vibrant democracies. Women’s political involvement leads to greater responsiveness to citizen needs and increases cooperation between party and ethnic lines.

The best chance the state has for balance is for Democrats to recapture control of the House of Representatives. Reynolds has two more years in office, and the Senate might be out of reach. But just a few seats can flip the House, which would bring some sanity and stability back to the Statehouse.

That’s why you should vote for Sara Monroy Huddleston for the Iowa House. The Storm Lake Democrat is running for the second time against Rep. Gary Worthan, R-Storm Lake. Huddleston is a former 12-year member of the Storm Lake City Council. She would be the first Latina elected to the legislature. Huddleston is cheerful and friendly, and works hard. She is a native of Mexico who earned her US citizenship. Huddleston earned a degree from Buena Vista University while rearing her daughter with husband Matt. For many years she was the only voice for Latinas in Storm Lake, and has inspired service in others who now serve on the city council and school board.

She will be a strong advocate for education and health care.

Read an interview with Sara here at Idlewords.com