TV With The Sound Off 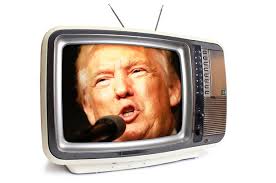 Chyron – an electronically generated caption superimposed on a television or movie screen. Although it’s often used generically, it actually comes from the name of the company whose software allows television producers to add those crawling words, phrases, and images to their broadcasts.

Heather Cox Richardson is a political historian and the best daily read for keeping up with the crazy during our long national nightmare that is the Donald Trump presidency. She reviews everything that happens through the eye of historical context which has a calming effect for the reader:  We’ve been down this road before and we survived!

Some aspects of today’s world are without historical precedent, however, for example, Fox News and conservative talk radio. The presence of the new things makes it more difficult to predict what is going to happen next and how it’s all going to play out based on what has happened historically.  There has always been propaganda. It is an essential weapon of war. But now there is propaganda on the public airwaves reaching so many people in such a powerful way that it is exponentially more powerful now than in the past. People, mostly Republicans, can now lie, they can make up anything they want to say and say it without impunity no matter how preposterous. Even Republicans at the state level can get away with it. Probably not so much at the local level because locals know what’s really going on.

That’s the scary part.  We’ve never had to deal with so many people being so hopelessly disinformed that we can’t even function as a country. It explains why, no matter how bad Trump is, his approval rating sits around the upper 30’s.  I get that this is low for an incumbent president but it’s astonishingly high in my view for someone as obviously completely horrible in every way as Trump.  Let’s face it, a tick would be better than Donald Trump in the White House and I’m not joking.

There is a reason the public airwaves were regulated back in the day and Donald Trump is why.

For more than a century, American media has tried to report facts impartially. At the beginning of the twentieth century, the Federal Communications Commission enshrined this principle in the Fairness Doctrine, which established that public media must base its news in facts and must present both sides of an argument fairly, honestly, and equitably. Beginning in the 1950s, Republicans who were ideologically opposed to the New Deal state complained that this principle, embraced by the “liberal media,” discriminated against them. In 1987, after President Ronald Reagan had placed new members on the board of the FCC, it abandoned the Fairness Doctrine.

By 2014, though, cell phones and Twitter offered images and reports from the ground in places like Ferguson, Missouri, that showed up the police version of events, echoed by Fox News Channel personalities and talk radio hosts, as dishonest… and dangerous. Young Black journalists called out the reigning narrative that people of color were “thugs” and “criminals,” but their protests did not change the basic media pattern of “both sides-ism.”

With that abandonment, talk radio took off, presenting an ideological narrative that showed white taxpayers under siege by godless women and people of color. The Fox News Channel was not far behind, calling itself “fair and balanced” until 2017, when it dropped the slogan, because it presented the ideological narrative that mainstream media rejected. Other media outlets tried to defend themselves against charges that they were biased against that narrative, so they opened up their pages and television shows to that ideological story. Increasingly, the extreme Republican narrative spread into the mainstream on the grounds that the media must show “both sides.”