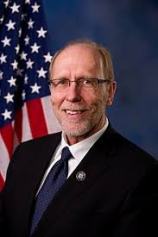 Washington, D.C. – Congressman Dave Loebsack released the following statement today in response to the recently revealed whistle blower complaint that was made against President Trump after his apparent attempt to pressure Ukraine into investigating the son of former Vice President Biden by threatening to withhold military support.

“The allegations surrounding President Trump’s call with Ukrainian officials, if proven correct, are game changing regarding the President’s abuse of power. Making a call to pressure a foreign leader to dig up dirt on a potential political rival, while threatening to withhold military assistance, is unacceptable. If the President, as he has said, has nothing to hide, then he should immediately release the transcript of the call and the whistle blower’s full complaint should be immediately conveyed to Congress as laid out in statute. It is imperative that Congress and the American people have all of the facts surrounding the President’s call. The rule of law requires no less.

“The President and his administration continue to stonewall any investigations, including refusing to release the full Mueller report on Russia’s interference in our elections. I look forward to hearing from the Director of National Intelligence later this week. I remain hopeful he will provide all relevant information in order for Congress to make an informed decision.”