Nuclear Weapons Must Be Eliminated 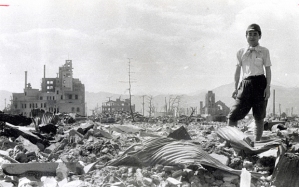 The Trump administration plans to spend far more than President Obama on the U.S. nuclear weapons complex. Depending on time frame, the administration will see Obama’s trillion dollars and raise it another half trillion.

Why do we continue to spend money at all on a weapons system we are required by treaty to eliminate? Why do we spend money on weapons that should never be used?

I’m mad and that’s not the half of it.

I’m mad at President Harry Truman for dropping the atomic bomb on Hiroshima at the end of World War II. I read Truman’s explanation in his memoir, Year of Decisions, and understand he thought it was a good idea. However, after Hiroshima, when our government understood the destructive capacity of nuclear weapons, dropping a second on Nagasaki was criminal.

I’m mad at the greatest generation for failure to comply with Article VI of the Non-Proliferation Treaty which was signed in 1968 and went into effect two years later. By now, we should be finished with nuclear weapons. The treaty binds us as follows:

Each of the Parties to the Treaty undertakes to pursue negotiations in good faith on effective measures relating to cessation of the nuclear arms race at an early date and to nuclear disarmament, and on a Treaty on general and complete disarmament under strict and effective international control.

The United States and Russia continue to hold the largest number of nuclear weapons even though reductions were made through treaty negotiations. Treaties are being dismantled by the current administration. If nuclear states had disarmed as the Non-Proliferation Treaty compels us, we wouldn’t even be having this conversation.

I’m mad at my generation of baby boomers. As the torch of nuclear non-proliferation was passed to us, my cohort chose to focus instead on personal liberation and financial well-being.

There was a resurgence of interest in non-proliferation during the nuclear freeze movement in the 1980s. This global advocacy contributed to negotiation of the INF Treaty between the United States and Soviet Union on the elimination of their intermediate-range and shorter-range missiles. It was signed by President Reagan and Soviet General Secretary Gorbachev on Dec. 8, 1987. The current administration announced plans to abandon the INF Treaty.

Why am I so mad? The problem of the existence of nuclear weapons should have been solved soon after society found their destructive capacity. I don’t want to pass that problem along to our daughter and her generation.

Our community has outgrown our fire station and tax levies aren’t sufficient to build a new one. Fire fighters are determined to raise the funds and implore us to “fill the boot” they leave at local businesses. If we had eliminated nuclear weapons, we might have enough money to build thousands of fire stations. Where are our priorities?

As a society we must create a nuclear weapons free world. There is no cure for a nuclear war. We must prevent what we cannot cure.

~Published on May 5, 2019 as a guest opinion in the Cedar Rapids Gazette