The Clean Power Plan Is Not Killing Coal

We’ve known the 45th president seeks to eliminate regulations on the fossil fuel industry so it’s no surprise he announced his intention to modify the Clean Power Plan developed by President Obama’s Environmental Protection Agency.

The plan was announced by the president in Charleston, West Virginia at a campaign-style rally on Aug. 21. Here’s what Al Gore, Chairman of the Climate Reality Project had to say.

Whether or not the Clean Power Plan exists makes little difference to the future of coal-fired power plants according to Taylor Kuykendall. 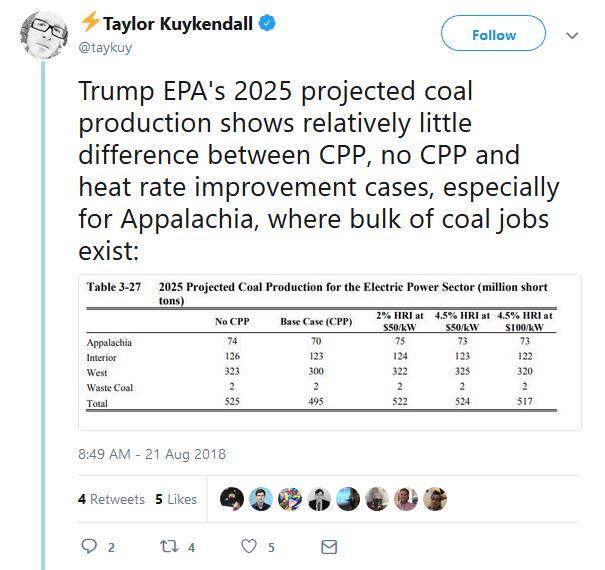 Regardless of executive actions, the days of coal fired power plants are numbered. Electricity produced by wind, solar arrays and natural gas will push coal out of the picture because they are cheaper. This was true when home owners replaced coal furnaces in their homes with natural gas in the 1950s and 1960s. It’s true now. Not only that, there are public health issues with burning coal. It is market conditions that will reduce coal consumption in the United States.

One assignment during my transportation career was to start a school in Boone County, West Virginia to re-train coal miners to become truck drivers. We got a one year grant from the governor’s office to train 250 people. The day we announced it was front page news in the Coal Valley Times. Along side the article about us was one indicating another round of coal miner layoffs.

I recall standing in Democratic Governor Gaston Caperton’s office watching a train laden with coal making its way along the Kanawha River. We knew the coal industry was dying then, it’s dying now, and no amount of special interest pressure on our federal government will bring it back.

Clean coal is a dirty lie and despite efforts to prop the fuel up, government should let go of it and leave it in the ground. As Gore said, “we will not be deterred” from building a stronger, clean energy economy.

1 Response to The Clean Power Plan Is Not Killing Coal