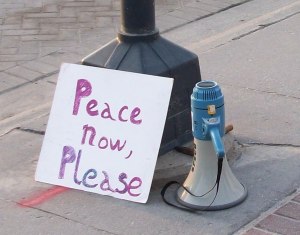 Here’s a simple beginning course: Ban nuclear-armed cruise missiles as Switzerland and Sweden have suggested. Or, go the distance and ratify the nuclear ban treaty.

In any case, a group in Des Moines will be gathering for their annual remembrances. If you’re in the area, please join them.

What: Remembering Hiroshima and Nagasaki: When will we stop the killing?
When: Aug. 6, at 7 p.m.
Where: Japanese Bell, Iowa State Capitol Grounds, Des Moines.
Parking is available at the Iowa Supreme Court lot south side of Court Ave. Please bring your own chairs and if you want, flowers to lay at the bell.

What: Second annual vigil at St. Ambrose Cathedral and Aug. 9 Rally and Direct Action @ Drone Command Center
When: Aug. 6 – 9.
Please join us in our second annual Aug. 6-9 vigil at St. Ambrose Cathedral, begging our Bishop to join the effort against the Des Moines Drone Command Center, in accordance with the U.S. Bishops’ 2014 statement finding U.S. drone warfare to be immoral and unjust. Aug. 6-9 commemorates the U.S. nuclear bombings of Hiroshima and Nagasaki, Japan. This year we are going to end our three-day vigil with a march from St. Ambrose to the Drone Command Center for an 11 a.m. Rally and Direct Action, the time the U.S. dropped the A-bomb on Nagasaki, Japan Aug 9, 1945.