This week, the Great March for Climate Action headed east through Iowa and Blog for Iowa marched a small part of the route with them. About 150 people gathered in Coralville on Wednesday, Aug. 20, and marched leisurely to the Iowa City pedestrian mall. We marched down the Coralville Strip, past Carver-Hawkeye arena, the University of Iowa Colleges of Medicine and Nursing, the Veterans Administration Hospital, the university’s coal-fired power plant, Old Capitol, and ended in front of the Sheraton Hotel in the pedestrian mall where we were greeted with applause upon arrival. Speeches followed.

It was a chance to meet some of the marchers, and here are some of the people BFIA interviewed and heard:

Ed Fallon, “People need to be thinking of what changes they can make in their own life.” 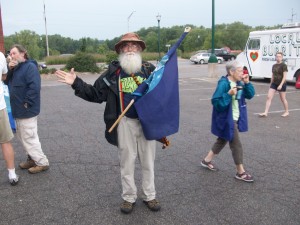 Blair Frank “I’m here because of the shift that’s happening around the planet in climate change.

Miriam Kashia, Mayor. “Imagine the audacity of a small group of ordinary citizens who believe they have to power to change the course of history.”

Rosella Lala Palazzolo selling raffle tickets. Rosella is a veteran of the Great Peace March for Global Nuclear Disarmament in 1986

Mike Carberry, “How we deal with climate change is the defining issue of our generation,” with Jimmy Betts

Jeffrey Czerwiec, “I’m walking every step of the way.”

Follow the Great March for Climate Action here, or better, join them.